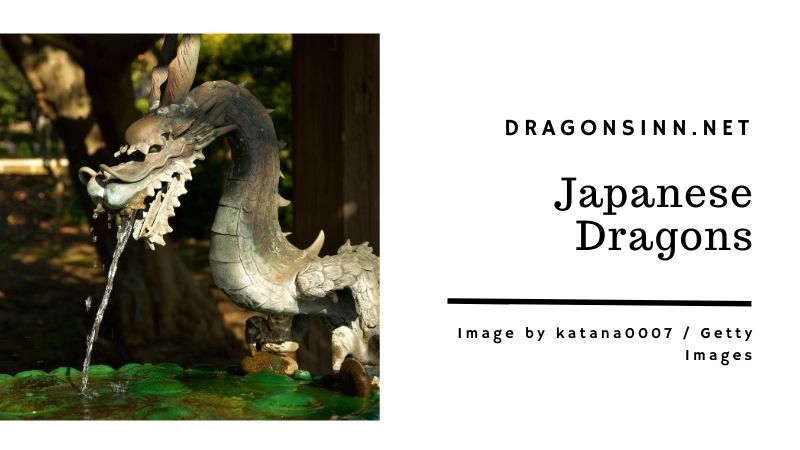 Originally published 1 June 2008. To be updated once the last pages from the old website have been transferred. Includes a short history of Japanese dragons along with a summary of famous Japanese dragons.

Japanese dragons are similar to those of China, but are more serpentine in shape, have only three claws on each foot, and fly less frequently. The reason why they have three toes/claws is because the Japanese believe Eastern dragons originated in their native homeland. Their belief was that when the dragons began to leave Japan, they gained toes. The further the dragons went, the more toes they gained. Which explains why the Chinese and Korean dragons have more toes. 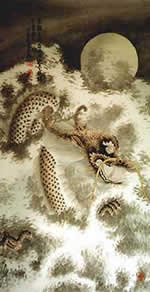 The most familiar type of Japanese dragon is the Tatsu or Ryu, which is a descendant of a primitive three-toed variety of Chinese dragon. Japanese dragons are traditionally associated more with the sea than rain. This is because Japan is less vulnerable to drought-related disasters as compared to China. Therefore they didn’t feel the same need to pray to rain-releasing dragons.

The Ryu originated from Buddhist religion and is one of the four divine beasts from Japanese mythology (the other three being the phoenix, turtle and kirin. Kirin is the Japanese unicorn). It is frequently the emblem of the Emperor or the hero.

The Ryu rules water. There is a story of how Ryu (or Ryu-jin, the most well-known dragon in Japanese legend) summons a storm by howls, and then transforms into a tornado. The tornado is called “Tatsu-maki” in Japanese. Tatsu is the kanji (Japanese calligraphy) meaning “dragon”. Maki means “roll”.

Dragon sculptures were often used to decorate the exterior of temples for Buddhists and Taoists of China and Japan. They represented the obstacles humans face throughout life that must first be overcome before enlightenment could be attained.

The dragon is chief among the ideal creatures of Japan. It is seen carved upon tombs, on temples, dwellings, and shops.

The Kinryu-no-Mai (Golden Dragon Dance) is held at the Sensoji Temple in Asakusa every Spring. The dragon is taken through the grounds of the Sensoji in a parade and then into the temple itself. People throw money into a grate and touch the dragon for luck. After this the dragon is taken outside and there is a performance where the dragon twists and turns in front of the watching crowd. 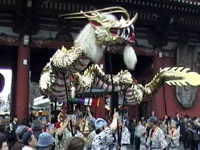 The Kinryu-no-Mai is held at the Sensoji Temple in Asakusa every Spring.
© SteveGoesTravelling

The festival commemorates the discovery in 628 of the temple’s gold Kannon, which is an image of the Goddess of Mercy, by two brothers who were fishing in the Sumida River. Legend says the discovery caused golden dragons to fly up to heaven. The dance is performed to celebrate this and bring good fortune and prosperity.

Dragon shrines and altars can still be seen in many parts of the Far East. They are usually along seashores and riverbanks, because most Eastern Dragons live in water.

The Isle of the Temple, in Japan’s Inland Sea, has become a famous stopover for pilgrims who meditate and pray to dragons. Descendants of the dragon became great rulers.

The Japanese Emperor Hirohito traced his ancestry back 125 generations to Princess Fruitful Jewel, daughter of a Dragon King of the Sea.

For hundreds of years, Japanese emperors sat concealed behind bamboo curtains whenever visitors came. Anyone who dared to peek was condemned to Death.

1.Ryu Jin or Ryo Wo
· Originated from Shinto, Japan’s traditional religion
· Dragon king of a kingdom of serpent people under the sea
· Ruled in a spectacular palace of crystal and coral
· Said to have a human body, and a serpent entwined in his crown.
· Known for his nobility and wisdom, Ryu-wo was a guardian of the Shinto faith. People who have fallen into the sea are said to have lived on in the kingdom of Ryu-wo.
· Ryu-jin has a submarine palace, Ryugo-Jo. His messenger is Riuja, a small white serpent with the face of an ancient man.
· A man named Hoori once visited the sea-god’s palace and got a wife. But as soon as the first baby came the wife became a dragon and sank beneath the sea.

2. Blue-Green Dragon
· Guardian of the Eastern signs of the Japanese Zodiac
· The Chinese characters making up the name can be read seperately as “qing,” meaning either “green” or “young,” and “long,” meaning “dragon.”
· In Japanese the kanji is “aoi” for “blue-green,” and “ryu,” for dragon. The name can also be pronounced “Sei Ryu.”
· This could be Sui Riu, mentioned two lines below.

· Sui Riu is a rain-dragon, which when in pain causes
red rain, coloured by its blood.
· Han Riu is striped with nine different colours and is forty feet long. This dragon can never reach heaven.
· Ka Riu is a small dragon; only seven feet long. It’s said
that Ka-Riu is scarlet, a fiery red. Some sources even
say that its body is all flame.
· Ri Riu has wonderful sight and can see more than 100 miles. 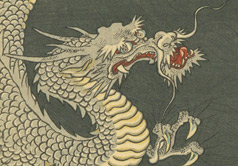 – Benten is the Japanese goddess who rides on a nameless dragon. She frequently descends to earth to stop the evil doings of other dragons.

– Fuku Riu is the Japanese Dragon of Good Luck. Likely to be depicted as “ascending” since an ascending dragon is a sign of good luck in Eastern culture.

– Kinryu is a golden dragon.

– Kiyo was originally a beautiful waitress. She becomes a dragon to seek revenge on a priest that lost his passion for her.

– O Goncho is a white dragon that signals famine.

– Uwibami is a huge fearsome flying beast that snatches and devours men right off horse’s backs.

– Yamata-no-Orochi is an eight-headed dragon.

Its belly is always bloody, its back is covered with moss.

The Orichi is slain by Susanoo, a travelling warrior.
Susanoo encounters a weeping couple, sacrificing their eighth and last daughter, Kushinada.

Susanoo asks for Kushinada’s hand in marriage, and transforms her into a comb which he places in his hair. The Orichi is tricked into getting drunk on sake. It dips each head into a liquor vat and is intoxicated, allowing Susanoo to slice it to pieces.

– Yofune-nushi was a sea serpent that feasted on young beautiful maidens. A [kick-ass] girl named Tokoyo blinded it with her knife, then killed it when it reared back and exposed its neck.

Eastern dragons can be rather…elusive. For example, not much is officially known about how Fuku Riu (the Japanese good luck dragon) looks like exactly.

I was discussing this with someone who was researching on Fuku Riu. Personally, I think such a dragon would have a certain “liveliness” as opposed to “fierceness”. 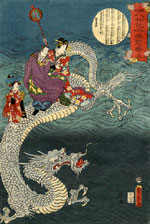 Print by Kunisada, 1860.
According to Dr. Karl Shuker, the print probably depicts the female sage Tai-shin flying across the ocean on a white dragon.

The following are reasons why I don’t think this white dragon is Fuku Riu. The little that can be gathered from this print is that the dragon is flying across an ocean. It’s during the night too. Good luck wouldn’t really be associated with the dark or night in Eastern mythology. White is the traditional color of mourning in many Eastern cultures. The dragon is white and also oldish-looking (the white bushy eyebrows, stray hairs on claws). Could it be O Goncho? If it is, then this dragon is signalling famine!

The more cheerful dragons in eastern mythology tend to be either looking upwards or “ascending” (towards the sky, the heavens, success, etc), like the gold dragon below. 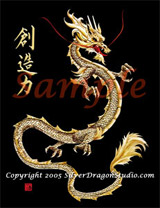 The white dragon in the Kunisada print isn’t really ascending.

So while the identity of the Kunisada white dragon isn’t exactly confirmed (at this point in time), it is likely that it isn’t Fuku Riu by process of elimination. All in all, the dragon’s doing a good job upkeeping its secrets and mystery.