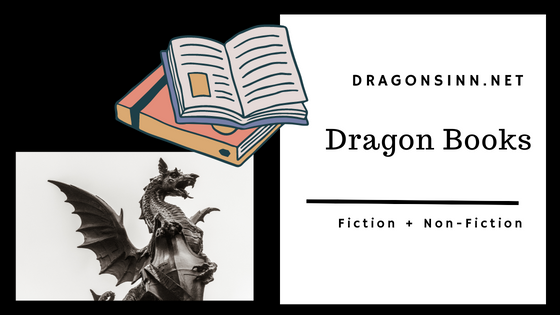 If you enjoyed Quenya and Sindarin (the Elvish languages created by J. R. R. Tolkien), you’ll be thrilled to learn more about these dragon language books!

One of the things I like the most about running a blog or website is hearing from readers who are up to all sorts of fascinating and creative projects.

That’s how I learned about Madeline Palmer, who has published two books titled “Reader, Dictionary and Thesaurus of the Dragon Tongue.”

These books describe a fully formed draconic language called Srínawésin that is as complex and rich as English or Chines. The draconic dictionary has over 2,500 words in it.

Here’s a quick chat with the author behind this beautiful and interesting language.

Side Note: Apparently, I forgot to transfer my “dragon books” list from the old site over to this site. I’ll try to dig it up and see what I can move over…

“I grew up in Alaska until my parents divorced in 1994 and I moved down to Washington State to be with my extended family.

I went to the University of Washington and majored in linguistics and anthropology.

I’ve devoted a good amount of my time into the Dragon Tongue over the years.”

1. Hi Madeline! Tell us more about your books and the inspiration behind them.

These books came about in a winding way and I have been working on them in one form or another for at least thirty years.

I read a couple of fantasy books when I was eleven and I noticed that they were all replete with words and languages of elves, dwarves and other creatures. But there was nothing similar for dragons, even when they were star actors (villains, often) of the story.

I started rectifying this fact when I was in English class at middle school and tried to work out some dragon words that made sense. I worked on the project off and on and became obsessed with dragons of all types, reading and researching dragon mythology from a variety of sources, Western and Eastern.

My skill with making a language was not very good, of course, because the only language I knew at the time was English which did not make it easy. I knew I wanted the language to be ancient, powerful, alien and unique but I just didn’t have the language knowledge to make this real.

Then I got into linguistics in college (it would not be too much to say that I took up this discipline in order to create the Dragon Tongue) and I had a much better understanding of languages in general, and how I wanted mine to work.

It went through several variations as I went to school and learned more. Finally I wrote up what was essentially a dissertation and published it on a website called Fiat Lingua, a language creation forum. I wrote it for linguists and it was not very accessible to those outside this field.

So I wrote The Dragon Tongue in Thirty Simple Lessons and published it on Amazon to make it accessible to dragon lovers and aficionados.

I hope I can get it into the hands of people who would be interested in this subject, even if they just used the words in the dragon language dictionary and did not learn the intricacies of the language.

2. Tell us more about the study of linguistics.

Linguistics is a fascinating field of study and it has many parts:

I have in my time studied (but not even approached mastery of) twenty languages including Celtic languages such as Welsh, Irish and Old Irish, German (Old High and modern), Icelandic (or Old Norse), Old English, Inupiaq from my home state of Alaska, Japanese, Latin, Hawaiian, Egyptian hieroglyphs and various Mayan languages, along with their writing systems.

All were fascinating and all helped in the creation of these books.

3. Do you have a favorite dragon or dragon story?

My favorite dragon story has to be The Hobbit. It is a total knock off of the last part of the Beowulf poem in Old English but I love Smaug’s monologue about how powerful he is.

“I am strong, strong, strong! My armor is like tenfold shields; my teeth are like swords; my claws, spears; the shock of my tail a thunderbolt and my wings a hurricane!”

I’ve struggled with mental health issues throughout my life and when I was really low I would say those lines to myself and it would psyche me up for the day ahead. It probably saved my life. It’s hard not to be powered up a bit by getting up and listing all the ways you are awesome every morning.

My favorite dragon artist is the unknown author of the Old Icelandic poem Fafnirsaga, which was one of the first documents in the West that portrayed dragons as able to speak and to have wisdom and lore. Beowulf is my second.

And I love all dragon artwork—I am fascinated with these creatures so much. I love any one taking the time to draw or paint them, each person adding to the understanding of these powerful creatures.

5. Please share your top 1-3 tips for those of us who struggle with learning a new language.

Tip One: Patience. It is a hard thing to learn another way of thinking and seeing the world and that combined with strange sounds and unfamiliar words can make it very daunting, but patience is essential. Babies learn even the most complicated languages in the world every day and I truly believe that if they can do it and I can do it, then anybody can.

Tip Two: Practice. Just like developing your muscles or your ability to run long distance, practice is essential. Try to use any bit of the language that you know at all times, even if it’s just remembering the names of things around you. Try and form words and phrases even if they are basic and simple at first. Use it as much as you can. Practice, practice, practice.

The Dragon Tongue is not an easy thing to master. It is very alien in its form and worldview and it takes a lot of time to understand a new way of thinking and interacting with the world.

The original title of the book was “The Dragon Tongue in Thirty Easy Lessons,” but I changed the ‘easy’ to ‘simple’ because I didn’t want it to sound like it wasn’t a challenge. It is a challenge.

There are at least three aspects of the language which (to my knowledge) aren’t in any human language, even seemingly difficult ones like Chinese, Walpiri or anything from the Caucasus Mountains.

It is a challenge but as I worked with the language it made me see the world around me in whole new ways.

I can never look at a cloud, the moon, a deer or a bird again and not think of how those subjects are treated by the language of a flying, predatory creature of extreme intelligence and will.

I love it and I hope I can communicate that to others.

Sharing the language is part of my life’s work and I am grateful for the chance to do so.

Thanks, Madeline, for letting us have a closer look at your creative thought process behind this unique project!