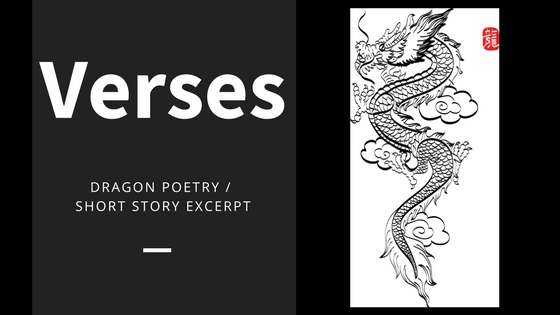 from Child of Flame (book IV in a series)

Alain, his two dogs Rage and Sorrow, and Adica along with other sorcerers need to clear the skies. They call on the dragons.

The screaming wind pounded him as a second, and then a third, dragon leaped toward the sky and caught the air under their vast wings, wider than houses.

Their bellies shone like fire, and their tails lashed the air. Ice billowed off the distant eastern peaks, blown by their passage.

A fourth and a fifth rose. Battered by the wind of their rising, Alain struggled to stay on his knees. A hot stream of stinging wind passed over his back. His hair singed, and his hands and lips cracked under the sudden blast of heat as all his tears dried away.

He crawled forward. Adica stood framed by the stone lintel, arms still raised. The wind did not batter her down, nor did she bow beneath it. She didn’t need his help. She was the Hallowed One of her tribe, as powerful as the dawn, able to face without cowering the great creatures they had woken. All he could do was keep low to the ground and pray.

The dragons rose in glory, as bright as lightning. The wind of their rising stirred the clouds into a rage of movement, swirling in a gale stronger than any storm wind.

As the dragons rose, the heavy layer of clouds began to break up, shredding in all directions. Drops of rain sizzled on stone. A single snowflake drifted down, dissolving before Alain’s eyes.

As the dragons rose, their brilliant figures dwindling, dusk came. Stars winked free of cloud. A cool wind swept in from the north. The dragons had driven the clouds away, and now the sorcerers could weave starlight in the loom…

As a child growing up in rural Oregon, Kate made up stories in order to escape to a world where lurid adventure fiction reigned supreme. She now writes steampunk, science fiction, fantasy, and YA. She met her future husband through a sword fight.

2. Scale of a Dragon, by J. Michael Radcliffe

Scale of a Dragon is a short story of 5,600 words set in the world of
The Guardian’s Apprentice.

Callen realized she was gazing upon a dragon!

It must be a relatively young one, judging by the size, but it was still as large as Callen’s cottage.

The beast was lying with its head partially under one wing and it was obviously badly wounded. There were scorch marks all along the blue-black scales covering its body, where wizard fire had obviously struck.

Most dragons repelled wizard fire with ease unless they were caught by surprise or were very young – which this one seemed to be.

Callen knew she should flee and call for help, but for some reason she just could not bring herself to do so. She stared at the creature in awe of its obvious power, for she could feel the magical aura radiating from it.

She crept closer to the beast and moved around towards the creature’s head, being careful to avoid the outstretched wings and tail. Now that she was closer she could see the dragon was still breathing, though the breaths were ragged and shallow.

Guided by her curiosity, Callen leaned forward to get a better look at the beast’s head.

As she craned her neck forward, a fallen branch caused her to stumble. The sound of the limb breaking echoed through the forest like a gunshot, and the dragon’s eye snapped open with a start – the pupil narrowing as it focused on Callen. The piercing stare of the fiery orb transfixed her.

The giant eye narrowed and the dragon snorted, sending a jet of dark blue-black flame just past Callen – a little to the left and she would have been incinerated. Callen screamed and dropped to her knees, covering her head with her hands.

“Please! Don’t hurt me!” she cried, her body shaking with fear.

“Hmph,” snorted the dragon again, between ragged breaths, though this time there was no fire.

When not acquiring more cats for their plan of world domination (cat armies are terribly hard to train), Mr. Radcliffe enjoy spinning stories from the wisps of magic around him.

3. The Dragon and the Lotus, by Joseph Robert Lewis

“For a month, I spent my evenings in the doctor’s house, pestering him with questions and learning what you can do with a tiger’s whiskers and the bones of an eagle, the bark of the birch tree, or the skin of an eel. And all the while I stared at the dragon, pacing and pacing in its little cage on the table.”

Asha paused to stare down into the face of a white lotus blossom by her knee.

At first, the dragon did nothing. It only stared at me through the open door as I held out my hand to it. I thought it might sniff me like a cat or lick me like a lizard.

It huddled down in the center of the cage, twitching its long white whiskers and wrapping its golden tail around its legs. And then it sprang at me. It happened so fast, I couldn’t even move.

The dragon dashed up my arm, racing over and under, its tiny claws slicing long tears in my skin until it reached my shoulder, and then it struck. It sank its fangs into my earlobe, and it suddenly felt like my head was on fire. Its teeth were like needles, dozens of them, and all envenomed.”

“How did you survive?”

“I nearly didn’t. I collapsed. When I awoke, the doctor was sitting beside me, but everything else had changed. Instead of a house in Yen, we were in a temple in the Ming Empire and eight years had passed.”

“Yes. To save my life, the doctor was forced to carry me with his luggage all the way back to his homeland to a temple where the monks and other doctors could care for me. They said it was a miracle that I awoke at all. But I wasn’t the same. Not quite. The dragon’s poison had left behind a shred of its soul in my ear. Even tiny dragons hunt very large prey, and by leaving a drop of its soul in its victim, the dragon can track it anywhere it goes and then devour it, bit by bit, when the animal eventually dies from the venom.

“I spent the next few years in the temple with the doctors and the monks learning their craft, studying herbs, and making medicines. Eventually I returned home to Yen, but when I arrived I found that my father had died and my mother and brothers had all left the city. No one could tell me where they’d gone.”

“Did you search for them?”

“No. I didn’t feel any great need to see them again, and I wouldn’t have known where to look anyway. Instead, I carried on looking for new creatures and plants to make my own medicines and trying to help the people I met along the way.”

“I see.” Priya reached out one hand to touch Asha’s knee. “You said that you awoke changed. That you had a piece of the dragon’s soul inside you?”

Author of dozens of science fiction and fantasy books, Joseph Robert Lewis enjoys creating worlds in which history, science, imagination, and humanity collide in unpredictable ways. He also likes writing about heroines that his daughters can respect and admire: women with courage, wit, and fierce intelligence.

4. The Champion of Dragons, by Mickey Zucker Reichert

Usashibo had never questioned his reason to slay the dragon.

The thought of surrendering his dream seemed so alien it did not merit consideration, but her words raised doubt.

Perhaps the dragon could kill me as it did all the others.

After so many consecutive victories, the thought of defeat appalled Usashibo. He knew he must fight the dragon, if only to prove himself invincible.

If he quit now, all his striving and sacrifice meant nothing.

One moment of weakness would make him and everything he believed in a deadly joke.

Ideals are worth dying for. I have trained my entire life for this one fight. If I cannot win, I deserve to die…

Mickey Zucker Reichert is an American fantasy fiction author of several best selling novels. She is a pediatrician from a town in Iowa.

DAW was the organisation to publish her first novel through Sheila Gilbert, who was still Reichert’s editor over twenty-five years later.

Reichert has published twenty plus novels, a novella, and fifty plus short stories.