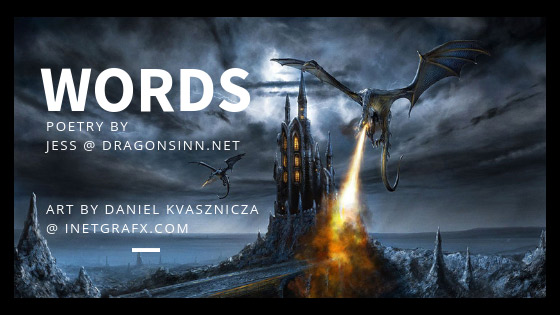 Second collection of dragon-themed poetry written about a decade ago, by Jess @ Dragonsinn.net

I am glad to continue transferring material from the old website onto this site. The old layout and content was rather outdated and it feels good to clear the (virtual) dust and cobwebs during the transfer.

If you have a dragon poem to share or book recommendation, be sure to send it over!

A 100-word exercise inspired by the painting in the header image.

Perched high, drops of mercury fell upon her glistening back. All of life had come to a standstill, all of life was crowded onto a single point.

One claw teetered over the edge, right wing held out for some balance. She saw him, circling mid-air, silvery-black in the distance.

The city was depending on them. Here they were, leaving.

Let’s go, he cried out to her.

With a last look at the city they had spent the last 16 winters in, she took off into the starless, midnight amber sky.

With them, Hope was gone.

I was exploring the concept of death being a dragon.

Let her come to you…
The end is naught
But the real beginning
resist
and your soul will know
Unrest
let her find you
and you both will soar
beyond the deepest nights
beyond unconquered depths.
She’s pain and joy
intertwined
tears and dreams
personified
She’s never spoken
and yet you’ve known her –
who can understand
the meaning of her being?
Whosoever unlocks the
mystery
has sealed the fate of
forbidden
certainty
hence
proceed
and fly away!
Your heart’s yearnings
to be fulfilled;
Your spirit’s cries
to rest in sanctity

The Moon becomes a
Silver sphere,
reflections in the water:
just as clear.

It’s snowing…
but time is
Frozen

A solitary stare: he
Knows you’re there.
Stances are fixated
Yet souls intently move.
Affirmation
and honour is yours thereafter –
The dragon beckons:

The kinship is awoken.

There was once a time when
They ruled our Earth
All the land was owned by them
The mighty beasts of Dragons.

Rulers of the seas and oceans
Kings of the Sky and Sun;
Queens of the Stars and Moon
They were the Guardians of the Earth.

Then came Man
Demanding and commanding
Driving them from all their dwellings
Into dark caverns to lie in.

The Dragons took flight as freedom was theirs
Where to, no one knows – but
Don’t the Sun and Moon still rise?
Don’t the waves still wash upon the shore?

Until the day they decide to wake
To leave all Earth in the hands of
Man, always will the Dragons be
The Guardians of The Earth.

The prince was deep in the heart of the endless forest.
He knew the dragon was near.
“She glows like a green crystal,” the town’s magi told him.
“Get her before she gets you.”
The prince was ready with his quiver of deadly, mercurial arrows.
Mercury meant instant death to a forest dragon.
He couldn’t waste a single arrow –
and then he realised
that the forest had gone deadly quiet
and even the air was still with the chill of Death.
A warmth on the back of his neck
and there she was
with clear amber eyes
her whole body glowing
the spirit and lifeblood of the forest itself.
The prince could release the arrow
straight into her eye
But Why?
And she toyed with his conscience
testing simultaneously, her own patience
Til the prince relented
Threw his bow and arrows upon the ground
And side by side
They were safe and sound
The townspeople took the prince for dead
When he never returned with the dragon’s head
When with her, he stayed,
She thought he’d be too afraid
But he loved her too much instead.