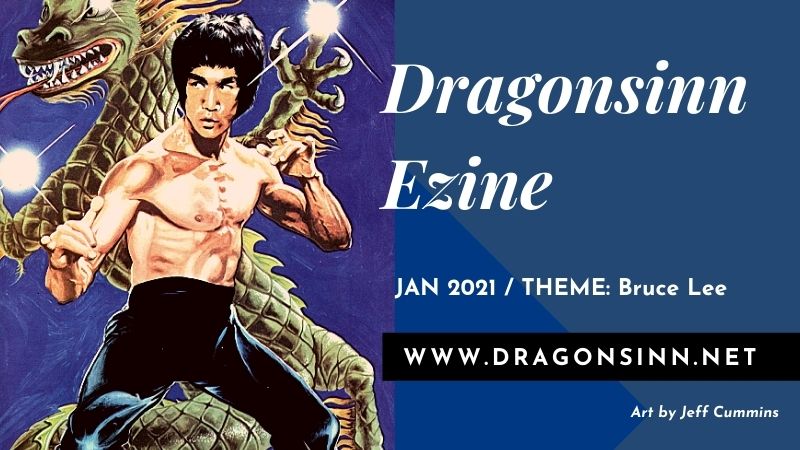 * Disclaimer: Amazon links in the post are affiliate links.

As promised, here is the first ezine for this year with the theme of Bruce Lee!

Some of the best art and posters I’ve seen of Bruce Lee included dragons alongside him, so this post will share some interesting info on this fascinating martial artist legend.

Let’s start off with Bruce Lee’s screen name before we dive into some Bruce Lee dragon pictures.

Why is Bruce Lee called “The Dragon”?

Having been in 20 films in Hong Kong before he was 18 years old, Bruce also had a stage name, which he used later in life too. As a child actor, he performed under the name “Lee Siu Loong,” which translates to “Little Dragon Lee.”

By the time he returned to the Hong Kong film industry as an adult in 1971, Bruce had many more names: “Little Dragon,” “Dragon Lee” and simply “The Dragon.” 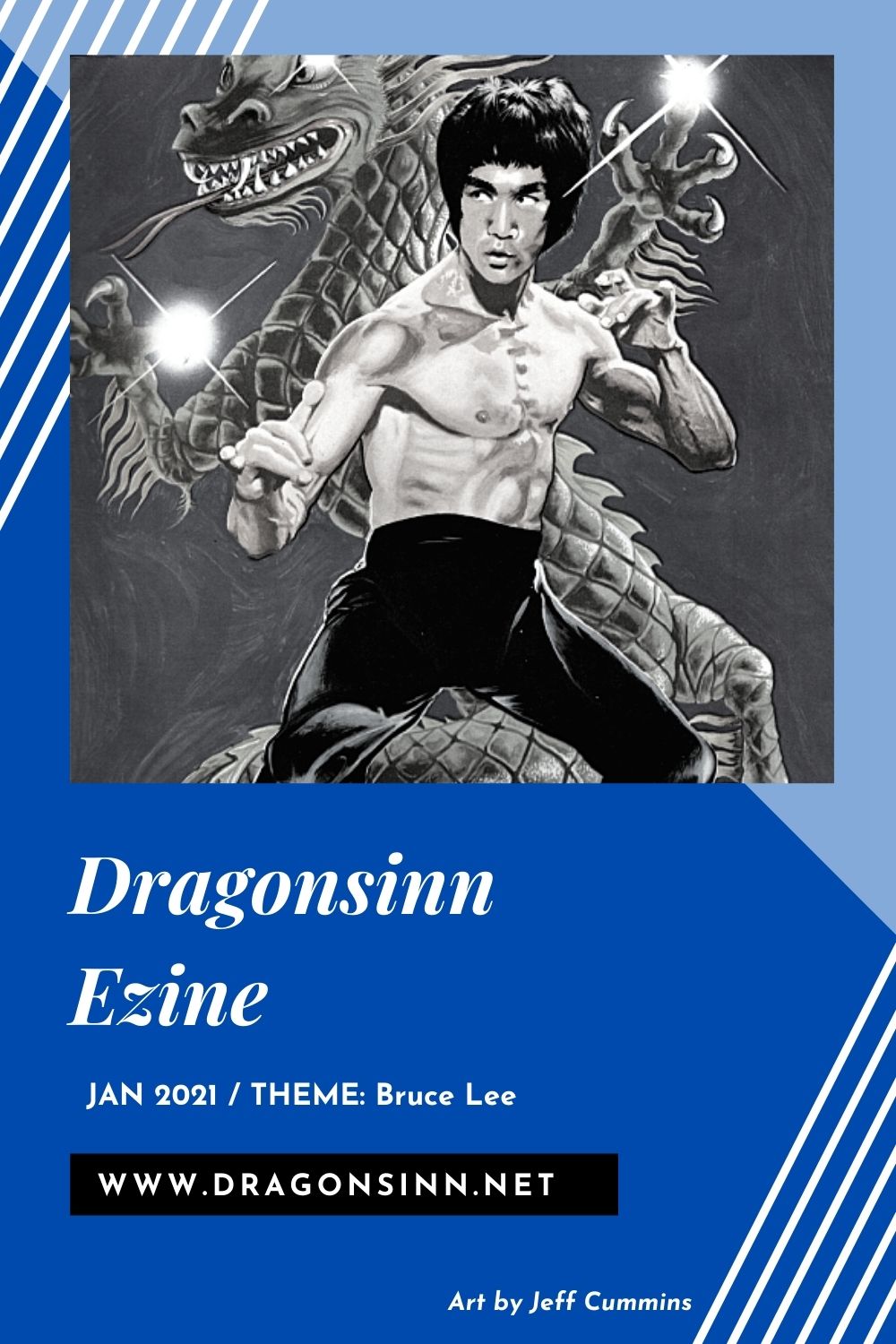 Bruce Lee: Year and Hour of The Dragon

Bruce Lee was born on November 27, 1940, at the Chinese Hospital in Chinatown, San Francisco. Bruce Lee’s mother gave birth to him in the Year of the Dragon during the Hour of the Dragon, which according to Chinese zodiac tradition is a strong and fortuitous omen. His Chinese given name reflected her hope that Bruce would return to and be successful in the United States one day.

The name “Lee Jun Fan” not only embodied his parents’ hopes and dreams for their son, but also for a prosperous China in the modern world. Many Chinese wanted to show that China, in the twilight of its empire and picked apart by colonial powers, would rise and become prosperous again.

Lee and his parents returned to Hong Kong when he was three months old. Bruce’s father, Lee Hoi-chuen, was Han Chinese, and his mother, Grace Ho, was of Eurasian ancestry.

(Sources: PDF from WingLuke.org and Wikipedia)

Influence on Film and Other Media

Enter the Dragon has been cited as one of the most influential action films of all time.

Similarly in India, Bruce Lee’s films had an influence on Bollywood masala films. After the success of Lee’s films such as Enter the Dragon in India, Bollywood films in the late 70’s incorporated fight scenes inspired by 1970s Hong Kong martial arts films up until the 1990s.

Bruce Lee films such as Game of Death and Enter the Dragon were also the foundation for video game genres such as beat ’em up action games and fighting games. The early beat ’em up game Kung-Fu Master (1984) was originally based on Bruce Lee’s Game of Death. The Street Fighter video game franchise (1987 debut) was inspired by Enter the Dragon, with the gameplay centered around an international fighting tournament, and each character having a unique combination of ethnicity, nationality and fighting style.

Street Fighter went on to set the template for all fighting games that followed.

A Little Bit About Bruce Lee’s Views on Race

In his book, Eric Peter Ho deems Bruce Lee’s mother to be “the final piece of the colorful jigsaw of Ho Kom-tong’s family,” citing her as the offspring of Ho Kom-tong’s mistress in Shanghai, believed to be a Eurasian woman named Cheung King-sin.

“This mixed heritage was a notable factor in Bruce’s life, and likely played a key role in shaping his progressive worldview on race. During his youth, Bruce faced incidents of derision and exclusion on account of not being 100 percent Chinese. As a teen, he was banned from formal instruction with Hong Kong Wing Chun kung fu master Ip Man after classmates cited Bruce’s Eurasian ancestry as being outside the bounds of acceptable Chinese martial arts custom.”

And here’s a snippet from an interview with Matthew Polly, a martial arts writer who also spent two years studying kung fu at a Shaolin temple in China, who wrote the biography Bruce Lee: A Life.

Question: How did Lee look at his mixed heritage?

Polly: He studied martial arts under Ip Man, but some other students didn’t like him because he wasn’t full-blooded Chinese. He also had a lot of resentment towards the British. When he was in high school, he would pick fights with English boys. Back in the 1950s, a lot of Chinese in Hong Kong believed that the city shouldn’t be under colonial rule. When he was 18, he returned to the US where he was born because he got into so many fights, and the police were going to arrest him. When he was in America, he faced racism there. He knew how it was like to be discriminated against by both sides. As a result, he developed an almost post-racial identity. When people asked him if he was American or Chinese, he said, “I think of myself as a human being first.”

My boyfriend has a copy of a Bruce Lee Collector’s Edition magazine (courtesy of his sister, whom you can check out on YouTube at Chef Adventures!).

It had fascinating photos and insights into his thought process and daily routine.

“Xiao Long was born in the United States, but the place where he really took root and became a world-famous martial artist was Hong Kong”, explains Robert Lee, Bruce’s younger brother in an interview with the popular fansite Bruce Lee Club. He refers to his older sibling by his Chinese name, which translates as ‘Little Dragon’.

“From an outstanding child star to his martial arts enlightenment as a young man, he regarded Hong Kong as his hometown.”

Source: How Hong Kong Shaped Bruce Lee into the Martial Artist of the Century

The Indian Express has an online gallery of eight memorable scenes from Enter the Dragon. You can retrace Lee’s footsteps through Hong Kong at legendary landmarks that appeared in the film like Tsing Shan Monastery and Aberdeen Harbour.

This gallery is an homage to both the man and the city.

Here are some Bruce Lee quotes that capture the legendary dragon energy or spirit associated with power and wisdom.

3) The more we value things, the less we value ourselves.

‎4) The successful warrior is the average man, with laser-like focus.

5) Be happy, but never satisfied.

6) Always be yourself, express yourself, have faith in yourself, do not go out and look for a successful personality and duplicate it.

7) The key to immortality is first living a life worth remembering.

9) Man, the living creature, the creating individual, is always more important than any established style or system.

10) The spirit of the individual is determined by his dominating thought habits.

11) Art is the way to the absolute and to the essence of human life. The aim of art is not the one-sided promotion of spirit, soul and senses, but the opening of all human capacities – thought, feeling, will – to the life rhythm of the world of nature. So will the voiceless voice be heard and the self be brought into harmony with it.

12) Do not allow negative thoughts to enter your mind for they are the weeds that strangle confidence.

The Bruce Lee Archives has tons of amazing photos!

To finish off this post, let’s watch these interviews to experience Bruce Lee “The Dragon’s” charisma and intellectual prowess.

Thanks for reading and I’ll be back next month with a (probably) jewelry-themed dragon ezine 🙂 Check out themes and past issues in the archives. 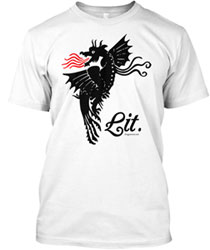 As an Amazon Associate, I earn from qualifying purchases.

Be part of one of the oldest dragon sites by subscribing to our ezine and newsletter!