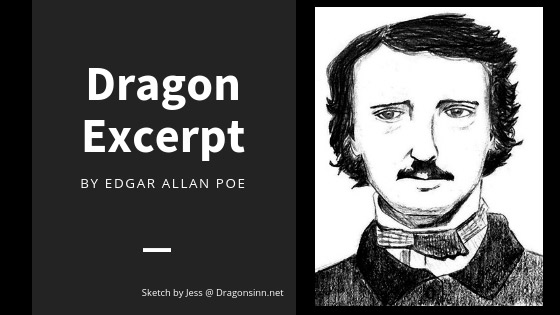 Poe’s Mad Trist, featuring a dragon excerpt from The Fall of the House of Usher. ‘But the good champion Ethelred, now entering within the door, was sore enraged and amazed to perceive no signal of the maliceful hermit; but, in the stead thereof, a dragon of a scaly and prodigious demeanour, and of a fiery tongue, which sate in guard before a palace of gold, with a floor of silver; and upon the wall there hung a shield of shining brass with this legend enwritten –

Who entereth herein, a conqueror hath bin;
Who slayeth the dragon, the shield he shall win.

And Ethelred uplifted his mace, and struck upon the head of the dragon, which fell before him, and gave up his pesty breath, with a shriek so horrid and harsh, and withal so piercing, that Ethelred had fain to close his ears with his hands against the dreadful noise of it, the like whereof was never before heard.’

Opening Lines of The Fall of The House of Usher

During the whole of a dull, dark, and soundless day in the autumn of the year, when the clouds hung oppressively low in the heavens, I had been passing alone, on horseback, through a singularly dreary tract of country; and at length found myself, as the shades of the evening drew on, within view of the melancholy House of Usher.

Edgar Allan Poe was one of the most influential and important American writers from the 19th century.

He was the first author to attempt to make a living as a professional writer.

His literary expertise ranges from poetry to the macabre, science fiction, and the modern detective story.

Poe’s writings feature a psychological intensity that is characteristic of his writings, particularly the tales of horror which comprise his best and best-known works.

Such stories include “The Black Cat,” “The Cask of Amontillado,” and “The Tell-Tale Heart.” They are often told via a first-person narrative. Through this technique, Poe probes the workings of a character’s psyche.

Poe had a big range of vocabulary and was fluent in several languages. Many times he selected a word because due to how it sounded. These words are often fairly obscure words by modern standards.