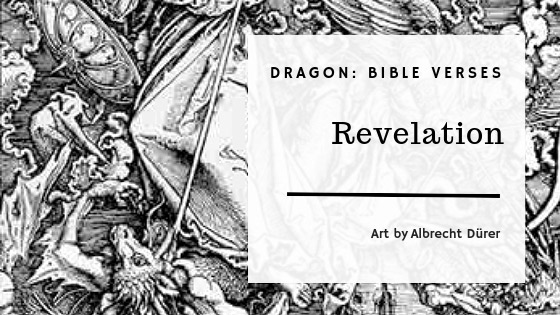 Summary and verses from Book of Revelation.

Part of a series of posts on dragon Bible verses.

SUMMARY OF THE BOOK OF REVELATION

Revelation was written when Christians were entering a time of persecution. The two periods most often mentioned are the latter part of Nero’s reign (a.d. 54-68) and the latter part of Domitian’s reign (81-96). Most interpreters date the book c. 95.

The fundamental truths of Revelation are not dependent upon adopting a particular perspective. They are available to anyone who reads the book for its overall message, with the ability to resist the temptation of becoming excessively enamored with the details.

12:3 Another mysterious sight appeared in the sky. There was a huge red dragon with seven heads and ten horns and a crown on each of his heads.

12:4 With his tail he dragged a third of the stars out of the sky and threw them down to the earth. He stood in front of the woman, in order to eat her child as soon as it was born.

12:7 Then war broke out in heaven. Michael and his angels fought against the dragon, who fought back with his angels.

12:9 The huge dragon was thrown out – that ancient serpent, named the Devil, or Satan, that deceived the whole world. He was thrown down to earth, and all his angels with him.

12:13 When the dragon realised that he had been thrown down to the earth, he began to pursue the woman who had given birth to the boy.

12:16 But the earth helped the woman; it opened its mouth and swallowed the water that had come from the dragon’s mouth.

12:17-18 The dragon was furious with the woman and went off to fight against the rest of her descendants, all those who obey God’s commandments and are faithful to the truth revealed by Jesus. And the dragon stood on the seashore.

13:2 The beast looked like a leopard, with feet like a bear’s feet and a mouth like a lion’s mouth. The dragon gave the beast his own power, his throne, and his vast authority.

13:11 Then I saw another beast, which came up out of the earth. It had two horns like a lamb’s horns, and it spoke like a dragon.

20:2 He seized the dragon, that ancient serpent – that is, the Devil, or Satan – and chained him up for a thousand years.

Revelation 20:1-3 (diff) And I saw an angel come down from heaven, having the key of the bottomless pit and and great chain in his hand. And he laid hold on the dragon, that old serpent, which is the Devil, and Satan, and bound him in a thousand years. And cast him into the bottomless pit, and shut him up, and set a seal upon him.