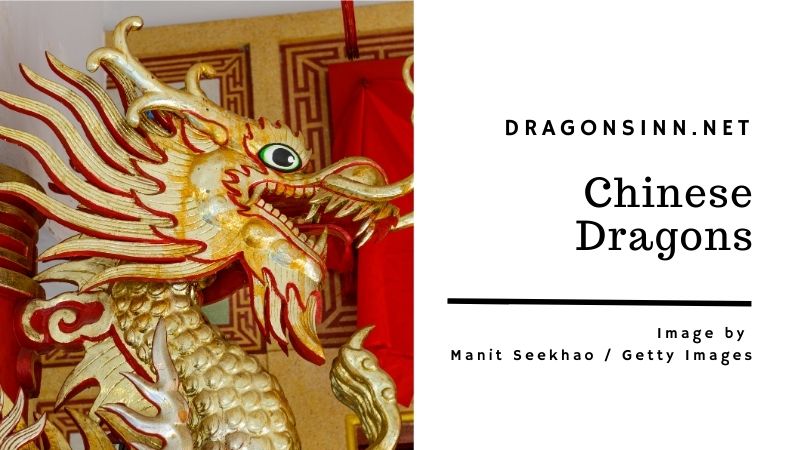 Originally published 1 June 2008. To be updated once the last pages from the old website have been transferred. Includes a short history of Chinese dragons along with a summary of famous Chinese dragons.

Dragons are deeply rooted in Chinese culture. The Chinese sign for the dragon first appeared upon turtle shields as a tribal totem way back during the Yin and Shang dynasties, and was eventually emblazed on the national flag during the Qing Dynasty [1644-1911 AD].

Chinese mythology is rich with the artwork, tales and depictions of dragons. Dragons are thought to give life, hence their breath is called “sheng chi” or divine energy. They are essentially benevolent and associated with abundance and blessing. They were helpful, wise and generous with their gifts when people encountered them. 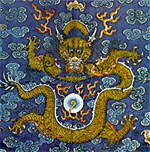 Known as the sons of heaven and the governors of rainfall, they symbolise royalty, nobility and good fortune. Some possessed great powers that allowed them to make rain and control floods, hence the dragon is a symbol of the natural world as well.

Wang Fu [Han dynasty 206 BC – AD 220], was the scholar who recorded the anatomy of the Chinese dragon in extensive detail. Chinese dragons have nine characteristics which are a complex combination. They have a camel’s head, a demon’s eyes, a cow’s ears, a deer’s horns, a clam’s belly, a snake’s neck, an eagle’s claws, a tiger’s paws and 117 carp scales.

Chinese dragons are physically concise. Of the 117 scales, 81 are of the yang essence [positive] while 36 are of the yin essence [negative]. This malevolent influence [which is thankfully the smaller ratio] accounts for their destructive and aggressive side. Just as water destroys, so can the dragons in the form of floods or droughts, tidal waves and storms. Legend has it that they caused the droughts by eclipsing the sun. Some of the worst floods were believed to have been the result of a mortal upsetting a dragon.

There are a total of nine types of classical Chinese dragons.

Chinese scholars categorized the dragons according to their cosmic tasks:

* UPDATE! (Jan 2012): I received an insightful email from a visitor to Dragonsinn.net (re: Eastern dragons and the number of toes). Email is pasted below 🙂 — take note!

“Hi! I’ve enjoyed glancing through your very comprehensive dragon site. However, I would like to suggest one small correction. Any sources that say ALL Chinese dragons have five toes are mistaken. Only the Imperial Dragons have five toes. All others have four. The photo of the Jingdezhen plate [blue/white picture below] on your Chinese dragons page is proof of this. Unfortunately, today, many Chinese people are unaware of this traditional distinction and modern depictions of five toed dragons are common. In the same way, many Japanese do not know that Japanese dragons should only have three toes and so you can easily find modern paintings and illustrations of dragons here with five toes. It’s very frustrating for a traditionalist like me!”

Decorative finials on roof ridges symbolize the importance of the building. Those used by the emperor would have nine figures. © Travel China Guide

The process for Chinese dragons to progress from hatchling to mature dragon is a lengthy one. They could take a whole millennium just to hatch! A millennium was needed for the dragon to grow scales and develop the head of a carp. Transformation of a fishlike nature would continue throughout the next millennium, and in the last 1000 years, the dragon would finally acquire the general appearance of an Oriental dragon.

Chinese Dragons and the Pearl

Many pictures of Oriental dragons contain a pearl. Dragons with this dragon pearl, found normally under their chin, would be filled with the power to ascend to heaven [the Eastern dragon ascending in a cloud or in the sky can be taken to be symbolic of “success in life”]. The pearl would multiply whatever it touched and is said to contain the dragon’s immense wisdom. Hence it is also known as the Pearl of Knowledge. Some also believe that it symbolises the dragon as the “keeper of the Tao”, Tao referring to the perfectly balanced Yin and Yang symbol. The pearl is also associated with wealth, good luck, and prosperity.

The Chinese believed the bones of Oriental dragons had vast healing powers. They were also thought to be the most effective. Dragon bones, said to be sweet, and dragon teeth would be used to treat a multitude of physical ailments. Prolonged intake would enable one to calm the spirit and lengthen his lifespan. Bones from China’s West and South provinces were known for their high quality. The teeth and bones were crushed into a powder and boiled for some time before other ingredients were added for a specific concoction.

In ancient China, nobody had any doubts about the existence of dragons.

Wooden bicycle in dragon form, made for Emperor Pu Yi.

People showed great respect for any dragon depicted in pictures, carvings and writings, and even the emperor prostrated himself before the image of a dragon with reverence and awe.

Emperors in many Asian countries claimed to have dragon ancestors. Thus, everything they used was decorated with dragons and described in terms of the dragon: dragon-throne, dragon-robe, dragon-bed, dragon-boat. Calling an emperor “dragon-face” was a supreme compliment. People believed that rulers could change themselves into dragons.

Dragons and the accompanying colours have different meanings in Eastern mythology. These are the common colors: 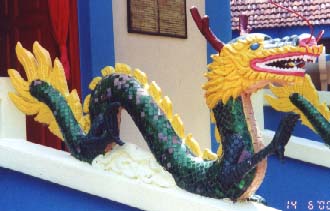 [full size] At a temple I went to in Penang.

Dragons also appear in Chinese Astrology. It appears fifth in the 12-year cycle of animals in the Chinese Zodiac.

The traits of each elemental Dragon-type are as follows.

ASTROLOGY – THE YEAR OF THE DRAGON

WOOD DRAGON: The Wood Dragon is creative, imaginative, and inquisitive. He is both a thinker and a doer and is capable of brilliant new concepts. Every move is guided by sound logic. His drive and ambition allow him to put many of his ideas into practice. Nevertheless this Dragon is capable of concealing his domination and tries not to offend. He will even compromise if it is advantageous. Although not as self-centered as other Dragons, he is still outspoken and fearless when challenged.

FIRE DRAGON: The Fire Dragon is the most extroverted and competitive Dragon. He tends to push too hard and expects a lot from everyone. His criticisms are objective and he has the ability to arouse massive popular support. His insatiable ambition can make him short-tempered and intolerant. He is an empire builder who needs to master his less favorable traits and learn how to communicate more humbly with people as individuals.

EARTH DRAGON: The Earth Dragon is a quieter, more reflective Dragon. She will be appreciative of others’ opinions even if she fails to agree with them. She is reasonable in her approach to problems and her leadership is less dictatorial. She is not given to outbursts of temper, but at the same time demands respect. She knows the value of cooperation and is more diplomatic than the other Dragons. She’s ambitious, but her initiatives are more carefully thought out.

WATER DRAGON: The Water Dragon is less selfish and opinionated than the other Dragons. She is more inhibited and less power-hungry. She can accept defeat without recriminations. She makes a good negotiator as she knows when, where, and how to apply pressure. She has a tendency to be over-optimistic and needs to learn how to relinquish what is unfeasible so she can concentrate her energies on the most rewarding endeavors.

METAL DRAGON: Metal Dragons are the most strong-willed Dragon. They’re inflexible, unbending, and combative. They can give little regard to the feelings of others. This ruthlessness can result in a rapid rise to a position of authority, but often at the cost of destroying important relationships. They will go their own way if they can’t gain support. They succeed because they refuse to accept failure. The Metal element also represents purity and precision.

Dragon people are self confident and impulsive and consequently does not always listen to the advice of others. They are also perfectionists and set high standards for themselves.

Although strong and decisive the Dragon person is not manipulative or sly. They enjoy being in command and like an emperor holding court, they eliminate obstacles until success is theirs!

Dragons are an important part of Chinese culture and mythology. They are the dragons with the most recorded history in the world. Today, spectacular dragon dances are still celebrated (especially during Chinese New Year) in parades around the world.

Welcoming the Matsu’s array with a dragon dance, Taiwan. © dans.photos

The dragons in the East have been seen as friendly and helpful creatures. They have proved to remain a symbol of strength, good fortune, wisdom and longevity.

– The dragon of Kinabalu had a pearl which the emperor wanted. He sent his two sons, Wee Ping and Wee San, to get it for him after his men perished in their efforts. Wee San flew into the dragon’s cave by a kite while it was out hunting. There he switched the pearl for a fake. Of course, the dragon knew it wasn’t his pearl, and made chase for the brother’s ships. Again it was Wee San who came up with the plan.

He ordered his men to shoot a cannon ball at the dragon, and when they did the dragon, thinking it was its pearl, swallowed the cannon. It died immediately. When they returned home, Wee Ping decided to take the credit for everything. Wee San was a good man and decided it wasn’t worth losing his family over. He went into self-imposed exile and was prosperous. He was made the ruler of Brunei, living a happy life. His brother, however, was never to know true happiness.

– Yellow dragon or dragon horse was the divine messenger that arose from the River Lo and revealed the 8 trigrams of I Ching. A yellow dragon is said to have presented the Chinese with a scroll inscribed with mystic characters. This is said to be the legendary origin of the Chinese system of writing.

– lung wang was a human-bodied fire dragon, an immortal dragon king living in a palace under the sea.

– the Thunder Dragon could transform into a boy with bright ultramarine skin who rode a scarlet carp. 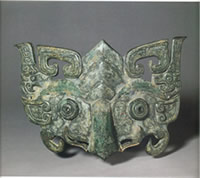 – t’ao t’ieh has one head and two forelegs, but has two bodies with separate hind legs and tails. It personifies gluttony. It is pictured on dishes to discourage greed and is commonly used by artists because of its symmetry.

– yu lung is the fish dragon symbolising success in exams

Almost all Taosi excavations in southern Shanxi Prov had produced pottery with a dragon totem. Chinese classics had mentioned two dragon-related clans, i.e., the Huan-long-shi clan during Lord Shun’s reign and the Yu-long-shi clan during Xia Dynasty. Xia people, who later moved from Shanxi to Henan Prov and founded the dynasty of Xia, certainly brought with them the important dragon totem, a mark that would also be observed among the Huns of Mongolia and the Tungus of Manchuria for the thousands of years to come.