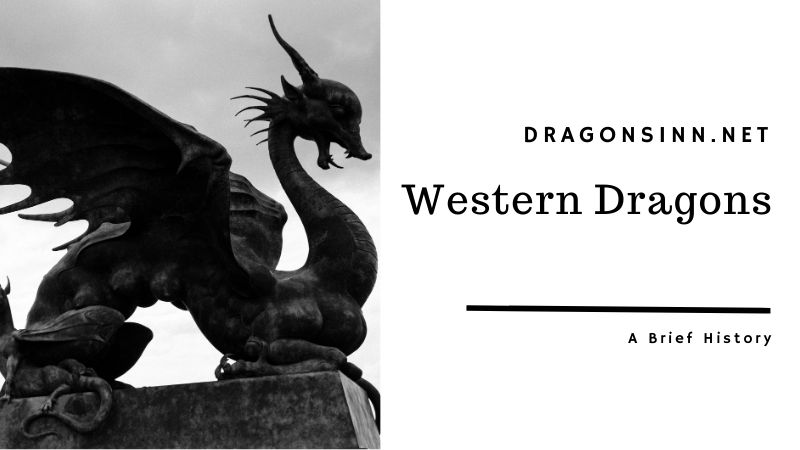 Originally published 1 June 2008. To be updated once the last pages from the old website have been transferred. Overview of the history of Western dragons.

Also, check out our page on Famous Western Dragons.

Western dragons have been extensively depicted as evil, mean, and bloodthirsty. They even represented what was to be despised and destroyed.

The word dragon itself can be traced to a Greek word, drakon. It means “sharp-sighted one”, “serpent”, “one with a deadly glance”, “to see”, “look at”. You get the idea.
In Latin, the Greek word was converted to draco, and it came to mean “giant snake” and the Romans shared this belief as well. They believe the dragon is serpent-like, usually with wings.

Other variations show the direct dragon-snake identification. The old German word for dragon, Lindwurm, really meant “snake-worm” or “snake, snake.” The old Anglo-Saxon word Wyrm has been translated as meaning equally “dragon,” “serpent,” or “worm.” In Beowolf the dragon is called the Worm, and in old English ballads, dragons are called the “laidly (loathly) Worms.” Throughout Ireland, dragon-like monsters were called “direful Wurms.”

The Different Names for a Dragon

European dragons inhabited Europe from pre-Christian times until the late 17th Century. They were seen by knights, priests, and naturalists who often recorded their encounters. Most dragons encountered in Europe were killed in a great battle – either by a brave man of great valour and strength or a holy man of great intellect. They could be subdued into harmlessness by a fair maiden too.

Dragons in Britain were a threat to the very survival of man, in addition to his ability to conquer unknown territories. They were blamed for almost all natural disasters: floods, fires, livestock deaths, famine, dried-up wells, droughts, plague, poisonous wells, etc. They were said to hatch from leather-like eggs or were born from the horrible vapors that surrounded ancient tombs.

As the fear of dragons rose, the people’s need for annihilation also began to rise. Most dragons were killed by royalty or those of more noble or holy birth. Two of the more common methods used were to use blades and hack them, or use some combustible material to throw down the dragons’ gullets. Because of the great heat within dragons, the material would explode, thus killing the dragon.

Classic dragons depicted in heraldry are well known. They have an almost impenetrable armour of scales and four powerful limbs with talon-tipped feet. They wield a long sweeping tail which ends in an arrow-headed sting, and often have a pair of bat-like wings. The white dragon was a royal standard for Saxons and it was blazed on King Arthur’s helmet. It was a symbol of might and skill in battle. During the battle of Crecy in Wales, a dragon banner was thrown over the Black Prince when he was unhorsed. This protected him while his enemies were crushed.

The Celts often showed great reverence for dragons and serpents, depicting them by the side of their gods. They came to represent wisdom and nobility, in a similar way to the dragons of the Orients. Even today, the red dragon can still be seen on the national flag of Wales, one claw raised as a warning of its power; its neck arched in readiness. The Celtic word Pendragon means “chief” because the dragon represented sovereignty in Celtic and Teutonic societies. The Greeks and Romans revered dragons too for their wisdom and feared them for their tremendous powers. Dragons and serpents are often viewed as guardians of sacred places and objects in Greek mythology.