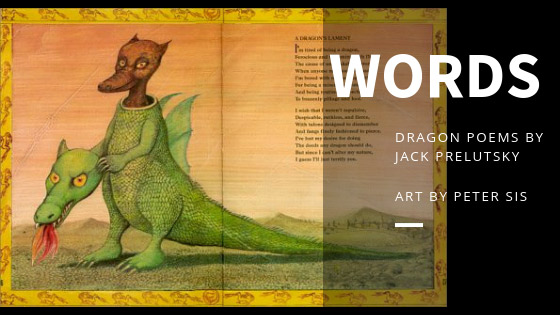 Named a U.S. Children’s Poet Laureate by the Poetry Foundation in 2006.

I’m tired of being a dragon,
Ferocious and brimming with flame,
The cause of unspeakable terror
When anyone mentions my name.
I’m bored with my bad reputation
For being a miserable brute,
And being routinely expected.
To brazenly pillage and loot.

I wish that I weren’t repulsive,
Despicable, ruthless and fierce,
With talons designed to dismember
And fangs finely fashioned to pierce.
I’ve lost my desire for doing
The deeds any dragon should do,
But since I can’t alter my nature,
I guess I’ll just terrify you.

Once They All Believed In Dragons

Once they all believed in dragons
When the world was fresh and young,
We were woven into legends,
Tales were told and songs were sung,
We were treated with obeisance,
We were honored, we were feared,
Then one day they stopped believing–
On that day, we disappeared.
Now they say our time is over,
Now they say we’ve lived our last,
Now we’re treated with derision
Where once we ruled unsurpassed.
We must make them all remember,
In some way we must reveal
That our spirit lives forever–
We are dragons! We are real!

The Dragons Are Singing Tonight

The Dragon of Death

In a faraway, faraway forest
Lies a treasure of infinite worth.
But guarding it closely forever
Looms a being as old as the earth.

Its body’s as big as a boulder,
And armored with shimmering scales.
Even the mountain tops tremble when
It thrashes it’s seven great tails.

Its eyes tell a story of terror,
They gleam with an angry red flame
As it timelessly watches its riches.
And the Dragon of Death is it’s name.

Its teeth are far sharper than daggers.
It can tear hardest metal to shreds.
It has seven mouths filled with these weapons,
For it’s neck swells to seven great heads.

Each head is as fierce as the other,
Each head breathes a fiery breath.
And any it touches must perish,
Set ablaze by the Dragon of Death.

All who have foolishly stumbled
On the Dragon of Death’s golden cash
Remain evermore in that forest,
Nothing left of their bodies but ash.

BIO: In 2006, the Poetry Foundation designated Jack Prelutsky as America’s first Children’s Poet Laureate.  He has published more than 70 poetry books. While Jack is best known for his imaginative and humorous verse, readers are now discovering how music is entwined with his poetry. Currently, Jack possibly appears more often on concert stages than bookstores or libraries.