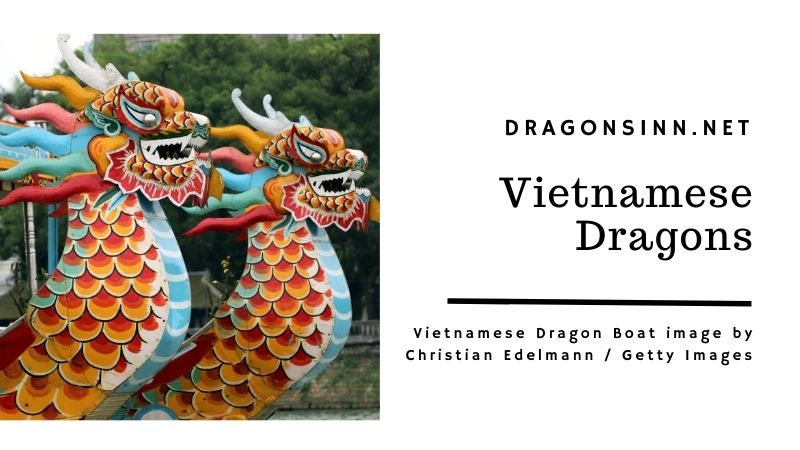 Originally published 1 June 2008. To be updated once the last pages from the old website have been transferred.

The Vietnamese Dragon is commonly called Con Rong, or Con Long which is more literary. It makes part of the four animals with supernatural power [Tu Linh] and occupies the top place. It is frequently used in Vietnamese art.

The union of the Dragon king Lac Long Quan coming from the Waters and of the fairy Au Co of terrestrial origins brought forth one hundred robust sons. Later, when the couple separated, fifty of them followed their father Dragon toward the lower coastal regions and founded the first Vietnamese nation named Van Lang. The other fifty followed their terrestrial mother toward the high plains to give birth later to a complex ethnic microcosm.

According to a Vietnamese legend, it was thanks to the return of a benefactor dragon that barbaric hordes coming from the North retreated. Upon contact with the sea, its fire-spitting tongues turned into a multitude of small islands and reefs with extravagant forms. That is why this bay is known in Vietnamese as “Ha Long” [Descending Dragon]. It is a marvellous natural site most visited by foreign tourists when they land in Vietnam.

The Mekong delta is related to the dragon as well. This river born in the foothills of the Himalayas [Tibet] divides into nine branches or nine dragons to throw itself in the golf of Cochinchina. That is why this region is called Cuu Long [Nine Dragons].

In water-puppet shows there is an effective combination of the visual effects provided by fire, water, and the movements of the puppets. Under the surface of the water is concealed the whole control system of the show. Calm and serene when fairy figures appear on it to sing and dance, it is agitated by stormy waves in scenes of battle with the arrival of fire-spitting dragons.

At a Tet (Vietnamese Lunar New Year) Festival, children who perform in the dragon dance are traditionally called the “heavenly dogs,” and the envelopes of “lucky money” they collect are symbolic offerings. The dragon dance, a vital part of Vietnamese culture, is performed in several festivals, particularly the Tet celebration. The dragon symbolizes blessing and prosperity, and the dance is performed to expel devils and to bring good luck.

Some proverbs and sayings mention dragons but imply something else: