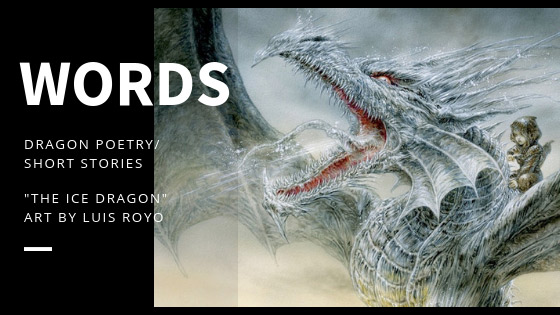 The ice dragon was a crystalline white, that shade of white that is so hard and cold that it is almost blue. It was covered with hoarfrost, so when it moved its skin broke and crackled as the crust on the snow crackles beneath a man’s boots, and flakes of rime fell off.

Its eyes were clear and deep and icy.

Its wings were vast and bat-like, colored all a faint translucent blue. Adara could see the clouds through them, and oftentimes the moon and stars, when the beast wheeled in frozen circles through the skies.

Its teeth were icicles, a triple row of them, jagged spears of unequal length, white against its deep blue maw.

When the ice dragon beat its wings, the cold winds blew and the snow swirled and scurried and the world seemed to shrink and shiver. Sometimes when a door flew open in the cold of winter, driven by a sudden gust of wind, the householder would run to bolt it and say, “An ice dragon flies nearby.”

And when the ice dragon opened its great mouth, and exhaled, it was not fire that came streaming out, the burning sulfurous stink of lesser dragons.

Ice formed when it breathed. Warmth fled. Fires guttered and went out, shriven by the chill. Trees froze through to their slow secret souls, and their limbs turned brittle and cracked from their own weight. Animals turned blue and whimpered and died, their eyes bulging and their skin covered over with frost.

The ice dragon breathed death into the world; death and quiet and cold.

AUTHOR BIO: George Raymond Richard Martin (born September 20, 1948) is an American novelist and short-story writer in the fantasy, horror, and science fiction genres. He is best known for his series of epic fantasy novels, A Song of Ice and Fire, which was later adapted into the HBO series Game of Thrones. In 2005, Lev Grossman of Time called Martin “the American Tolkien.”

2. The Boy Who Played With Fire, by Jess @ Dragonsinn.net

2 a.m., four of them, stealthing around in the London Underground.

Pax couldn’t get the image out of his mind. No better way to spend an otherwise lackluster Saturday night.

“$20,000 for the dragon’s head!” ran the televised message on MythoBusters, a few hours ago. “Get her before she gets you. She lies somewhere, deep in the heart of the underground…”

Pax and Ashley had been curled up on the couch during the episode. Prashanti was making out with Chris somewhere on the floor, to one side of the small, hand-me-down TV set. Four housemates: two of them aimless job-hopping punks, while the other two were Liberal Arts undergraduates, frequently playing truant. The group of friends called their clique “FourSquared” (“4Sq.” for short).

“She glows like a green crystal—get her before she gets you.” Pax heard what the plastic hostess, the 69 year-old sprightly, busty, beach-blonde-haired Juniper Bell, had said earlier. Plastic, because Juniper hardly had any of her original body parts left, and had collagen in her lips that was older than any one individual in FourSquared. Juniper was a riot though, and Pax had to give her credit, for her energy and sense of style.

“They’re talking about your dragon,” Ashley joked. She was curled up on the couch, touching up one of her painted fingernails with a dark blue nail polish.

“Maybe they are…” Pax started whistling to himself. He and Chris had left the image of a green dragon on one of London’s public transport systems before. It was one of their first masterpieces of street art. Ashley had liked the dashes of orange on the dragon’s throat and tail so much, she’d dyed her hair that color ever since.

“Have you ever seen something ‘glowing like a green crystal’?” Ashley asked Pax, using the tip of her tongue to play around with the piercing on her lower right lip.

“Nope,” Pax lied. “Still, it’d be cool—2 a.m., four of us, stealthing around in the London Underground…”

Jess created Dragonsinn in 1999 and decided it deserved a revamp in 2018. She is currently reading a beginner’s book on how to draw and paint animals.

3. The Tangle Box, by Terry Brooks

NIGHTSHADE! Why was she here? The Witch Nightshade was no friend of his. “Why did you send for me?” she asked him.

Then a shadow fell over them both, and the sky was filled with Strabo’s dark bulk as the dragon settled gingerly at the edge of the dais.

“What does he have to do with your note?”

“My note?” Nightshade’s voice was a rasp of disbelief. “I came in answer to the play-king’s missive.”

Ben saw what was happening then: Separate notes to each, seemingly from one another, actually from someone else entirely, meant to lure them to this spot. Why? Then suddenly he caught sight of someone backing from the dais, backing away from a box that sat open, smoke or mist already lifting from its interior…

AUTHOR BIO: Terence Dean Brooks is an American writer of fantasy fiction. He writes mainly epic fantasy, and has also written two movie novelizations. He has written 23 New York Times bestsellers during his writing career, and has over 21 million copies of his books in print. He is one of the biggest-selling living fantasy writers.