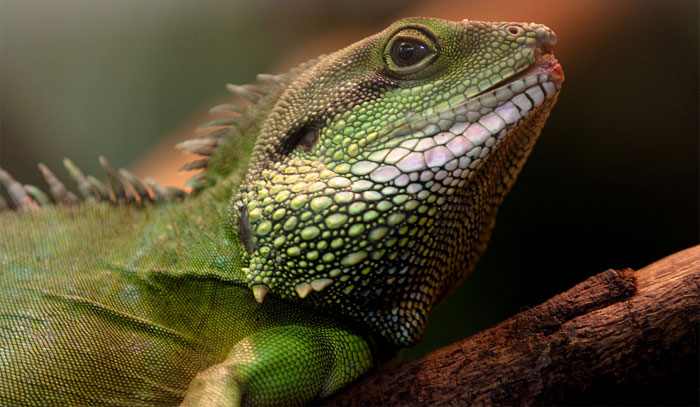 This post showcases some real dragons, in terms of draconic-related (in name and appearance) reptiles alive today.

2. Part of the Iguana Family.

3. Found in Central and South American rainforests, near rivers and streams.

6. Is the prey of large birds, snakes, fish, other large reptiles, and mammals.

7. They have long toes and sharp claws.

8. Nicknamed the “Jesus Christ Lizard”. When fleeing from a predator, they are very fast and can even run on top of the water.

9. Basilisks have large hind feet with flaps of skin between each toe. The web-like feet adds to their speed, and gives the appearance of “walking on water”.

10. Smaller basilisks can run about 10-20 meters on the water without sinking. Young basilisks can usually run farther than older ones.

11. They are not endangered.

14. Outstanding camouflage allows them to remain motionless (and very hard to detect).

1. Bearded dragons are from Australia.

2. The most common species in the pet industry is the Inland Bearded Dragon.

3. Lives in the arid woodlands and deserts of central Australia. Spends much of its waking hours in bushes and trees, and basking on rocks.

4. When it is extremely hot, the bearded dragon will burrow underground.

5. Is an omnivore. Forages for food such as insects, small lizards and mammals, fruit, flowers, and other plant material.

7. It is called “bearded” because of its ability to flare out the skin in the throat region when threatened, or territorial.

8. There are spines on the throat, sides of the head, and sides of the body. The head is wedge-shaped, and the bearded dragon has a tail that is almost as long as the body.

9. Some difficulty distinguishing males from females among juveniles.

10. When they become adults, sexual differences are more apparent. The males have larger heads and larger, darker beards. The femoral (at the thigh) pores of males also distinguish them from females.

11. Adult males grow up to 2 feet in length (including tail).

12. Are typically social creatures. Appear to enjoy interaction with humans.

2. Also found living in the forests of eastern Thailand, Vietnam, and parts of China. Found in tree branches and bushes overhanging the river, and in burrows along river banks.

3. When nervous or frightened, they take refuge in water.

4. Strong swimmers and like the Australian water lizards, can remain submerged for long periods of time.

5. Usually live in groups with one dominant male and several females.

8. There are touches of blue and pink around the throat and often a yellowish wash along the flanks. Limbs are well-developed, with sharp-clawed fingers and toes (five digits on each).

9. The eyes are relatively large, with orange irises.

10. The maximum length including tail is about 90 cm/3ft for adult males. Females are shorter and slighter than males.

11. Tails are banded green and a dark brownish-green to brown.

12. Tails are used for propelling in the water, for balance when climbing, and works as a whip when needed.

13. Have a third eye. Is actually a small round spot located at the top of the head, between the eyes, known as the parietal.

14. Third eye is thought to help water dragons, as well as a number of other reptiles, sense light differences.

2. Have long powerful legs and claws.

3. Tail forms 2/3 of their length and is almost all muscle.

4. Tail is laterally compressed to act like an oar when swimming.

6. Eastern water dragons have a central row of enlarged spikey spines at the back of the head. These spikes continue down the spine, decreasing in size to the base of the tail.

7. The upper body is grey-green with cream and black transverse bands on the body and tail. Underneath the body is a creamy brown-grey.

8. Juveniles are light brown, with head and feet disproportionately large compared to the adults.

9. The females lack the bright colourations on the chest and throat, and have narrower, more delicate heads. The male dragon’s head is much larger and angular.

10. Water dragons have been known to remain underwater for up to 90 minutes.

11. When underwater, they slow their heart rate and conduct some gas exchange across their skin, both O2 and CO2.

12. Their long powerful back legs and sharp claws help in their abilities to climb trees and dig holes for hibernation and nesting.

13. Are omnivorous. They generally feed on insects, frogs, yabbies, other aquatic organisms, fruits, berries and flowers. They can eat under water.

14. There have been recorded incidents of cannibalism occurring to young hatchlings.

1. The flying dragon is a small lizard commonly found in forests of the South-East Asian region.

3. Belong to the lizard family Agamidae, widespread in the warmer parts of the Old World.

4. Lives in trees and seldom comes to the ground. Generally quite inconspicuous.

5. Active during the day, usually seen clinging to a tree trunk.

6. Also can be found in places where there are trees, including suburbs, public housing estates and agricultural land like coconut plantations.

7. They prey on many kinds of arthropods [insects and spiders]. Fond of feasting on ants.

8. Six or seven of the flying dragon’s ribs are much longer than the others. This increases the gliding surface of its patagium [the stretch of skin lying between the ribs].

9. At rest, the patagium is neatly folded to the sides of the body. In many species the patagium is boldly patterned and brightly coloured, somewhat like a butterfly’s wings.

10. The male flying dragons are about 21cm in total length; females are slightly smaller.

11. A graphic explanation of this dragon’s flight:

3. Keen sense of smell enables them to seek out carrion up to 5 miles (8.5 kilometers) away.

4. Despite their size, Komodos are fast and agile. They can climb trees and are good swimmers.

5. Teeth resemble those of flesh-eating sharks. They have about 60 teeth that they replace frequently, and are positioned to cut out chunks of their prey. The highly flexible skull allows for swallowing large pieces of food.

6. The Komodo’s mouth is full of bacteria. Even if its prey survives the original attack, it will die of infection later.

7. Are native to four southeastern islands of Indonesia: Flores, Gili Motang, Komodo and Rinca. They have also been found on the island of Padar.

8. The natural habitat of Komodo dragons is extremely harsh by human standards – arid volcanic islands have steep slopes and little available water most of the year.

9. Outsiders found out about the Komodo dragons after WW1 when a report came from a downed aircraft, and the surviving pilot swam to Komodo Island.

10. In the wild, Komodo dragons are generally solitary, except during the breeding season.

11. They have been known to bring down adult water buffalos.

12. Will eat anything they can overpower including small dragons and small or injured humans (dragons make up to 10% of their diet).

14. In some zoos, Komodos are fed previously frozen rats.