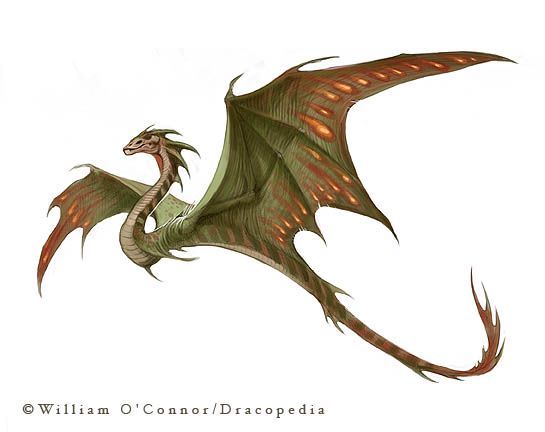 This post showcases a range of different dragon types.

1. This type of dragon originated in Europe

2. Nearly always depicted as having two bird-like legs and two wings, sometimes with eagle’s claws on the wingtips

3. Some had a serpent’s head and the hind end of a serpent or lizard

4. Wyverns have been depicted in heraldry on shields, coats of arms and banners for hundreds of years, and are a symbol of strength and endurance

Image from Dragon School and Chevin.

7. The French Wyvern is depicted with the head and upper body of a voluptuous woman. A ruby set between her eyes helps her find her way through the Underworld

9. Delighted in killing young maidens, other wyverns and relishing the taste of human flesh. Read about Maud and the Wyvern to find out how the wyvern came to like human meat, and how the wyvern Vermithrax Pejorative developed a taste for virgin maidens.

10. Modern depictions of wyverns include:

11. Came to symbolise envy, famine, war and hatred — this depiction of wyverns is associated with pestilence and viciousness

1. One of the most feared monsters in the early Western world

3. Large tuft on its head represented a crown

5. Hailed as king of the serpents

7. Other variations include: Regulus [Latin]

8. Could split boulders with a single glance from their deadly eyes

10. Streams and rivers they drank from would be permanently poisoned

11. Odour of its sweat was foul and toxic

12. Land they passed through would become barren wasteland

13. These would counter the basilisk’s lethal powers:

14. Became known as the cockatrice in medieval times because of depictions with a cockerel’s head and feathered wings

15. Would be destroyed by seeing its own reflection in a mirror

2. Related to the Chimera, Ceberus, and Ladon, the ferocious dragon protector of the garden of the Hesperides and its golden apples

3. Had nine horned dragon heads which would duplicate when cut off

4. Was a long writhing water snake which resided in Lake Lerna

5. Hercules had to serve King Eurystheus of Tiryns for 12 years and perform 10 labours for him so that he could be purified for killing his sons during a moment of insanity

7. Hercules was aided by Iolaus who suggested searing the Hydra’s necks after Hercule’s cut them off

8. This cut the blood flow and new heads were prevented from growing

9. The Hydra died after all the heads were slain except for an immortal head, which Hercules and Iolaus buried under a rock

10. The rock is said to be found on the road from Lerna to Elaeus

11. The Hydra’s gall was poisonous, so Hercules dipped his arrows in them. This would later cause Hercules’s death.

12. The Constellation Hydra is the longest constellation in the sky and the largest in terms of area

13. Hydra’s brightest star is called Alphard, which means “the solitary one”

14. Located in the area of the sky known as “the Sea”, it is said to represent the great dragon of chaos, Tiamat, in early Babylonian mythology

1. An amphiptere resembles a large snake with two feathered wings, but with a dragon’s head

2. They are the most serpent-like dragons; they have no legs

3. Related to the wyvern

5. The Henham [Essex, England] Amphiptere was as thick as a man’s leg and was about 9 feet [3 m] long

6. Had two tongues – one normal, the other shaped like an arrow

7. Villagers managed to shoo it simply by hurling a few stones and farming tools at it [wasn’t it a nice fellow]

8. The Arabian Amphiptere lives in treetops, mainly the frankincense trees of Arabia

9. If an animal comes too close to the trees, the amphiptere falls backwards from high in the branches and stabs the animal with its barbed tail

10. This causes death to most animals, including humans

11. The Quetzalcoatl was a kind of Amphiptere

12. The Quetzalcoatl was a feathered snake god dating as far back as the Mayan culture of Mexico.

13. Also known as a dragon-being who created the fifth cycle of mankind by using ancestral ashes and bones to create the human body

14. Was conceived after his mother swallowed a piece of jade

15. Aztec, Toltec and Middle American legends also attribute him with being the son of the virgin goddess Coatlicue

16. The god was a symbol of wisdom, life and the wind

17. In dragon form, the quetzacoatl was a magnificent sky dragon that streaked across the sky in resplendent emerald plumes

18. It was actually identified by zoologists as being a mythological fusion of a serpent and quetzal bird

2. Their breath was toxic and spread diseases

4. Could be defeated by a novel means

5. The sight of a naked man left them witless

6. Used to good effect because:

7. The Gargouille spout fountains of water instead of toxins

8. First emerged from the Seine waters in the year 520

9. Described as having a long, reptilian neck, a slender snout and jaws, heavy brows, and membranous wings

10. Dubbed “gargouille” or “gargler” by the locals after the entire region was severely flooded by the jets of water that spewed out of the gargouille’s throat

11. This gargouille was defeated by an archbishop who placed two fingers against one another in the form of the Cross

12. Gargoyles derive their name and water-spouting talents from gargouilles

13. Churches and cathedrals in France and around the world still have gargoyles

14. They sit on their haunches, projecting outwards so that water is drained and spouted well clear of the base of the building

15. Gargoyle figures served the role of visual communication during the Medieval period, telling stories and reporting on life because many people were illiterate

2. This doesn’t mean they were any less deadly.

3. The Dragon of Mt. Pilatus had blood that was instantly lethal.

5. Dragonets are described as having slender jaws, long necks, and pointed wings.

7. In Anne McCaffrey’s Pern series, a dragonet’s internal clock is set to wake every morning when the sun rises.

1. Relatively young in comparison to their ancient Dragon brethren.

2. Drakes are always flying when moving. Many dragons typically walk while moving.

3. Drakes have four legs, and are very much like western dragons.

7. Nest in rocky cliffs, and/or other inaccessible places.

8. Four powerful legs armed with razor sharp claws are capable of cutting through all but the strongest armour.

9. Fire Drakes are reddish and have a firey breath weapon. They spout great gouts of withering flame upon their foes. A light shimmer of heat may rise from their body.

10. Cold Drakes are usually white or bluish and breathe frost, snow, and hail. They fight using tooth and claw.

11. Winged Drakes are the most terrifying of all dragons. Their huge bat-like wings allow them to take to the air and wreak havoc on their enemies from above.

12. Smaug the Golden from “The Hobbit” was a winged drake.

13. Drakes are more than capable of destroying entire armies single-handed. 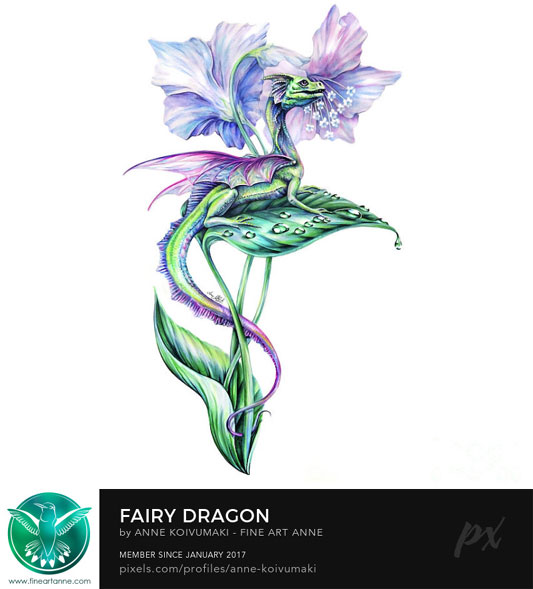 1. Thought to be the tiniest dragons.

2. The faerie dragon makes its home amidst the tangled forests of the world.

3. Can also be found in extremely secluded natural areas, especially areas with flowers and water.

4. Faerie dragons are about one foot long. They have thin bodies, long tails, gossamer butterfly wings, and huge smiles.

5. Their colors range through the spectrum, changing as they age, from the red of a hatchling to the black of a great wyrm.

6. The hides of females have a golden tinge that sparkles in the sunlight; males have a silver tinge.

7. They are linguists, well-versed in Draconic, Human, and Elven tongues.

8. Some say they can turn invisible.

9. Faerie dragons can communicate telepathically with one another, within a range of 2 miles.

11. While often depicted with butterfly wings, wings may also be faerie-like instead.

12. Faerie dragons may often take great amounts of time just to prepare one joke; they also often enlist the help of pixies and sprites.

13. Most faerie dragons have a temperament that is Chaotic Good. They have pure intentions, but are extremely fond of mischief.

1. Similar to the European Wyrm.

2. Falls between the birdlike wyvern and the snakelike guivre. Has a serpentine body with one pair of legs, or forelimbs.

6. Would also dig up corpses in churchyards, which contributes to their reputation as a creature of death, war and disease.

7. In legend, the hero Siegfried conquered a lindwyrm that lived near the town of Worms in Germany.

8. In 1335, when the skull of a wooly rhinoceros was found in a cave nearby Klagenfurt in Germany, it was believed to be a dragon’s skull.

9. In Nordic and German heraldry, the lindworm is the same as a wyvern, though the folkloric lindworm lacks wings.

10. Marco Polo is said to have come across Lindworms during his travels. According to The Travels of Marco Polo, he wrote about “snakes and great serpents of such vast size as to strike fear into those who see them, and so hideous that the very account of them must excite the wonder of those to hear it.”

1. Wyrms resemble gigantic serpents, crawling on their bellies without legs or wings.

2. Their lack of limbs should not lead to underestimation, as their snapping jaws and powerful tails are more than adequate to dispatch all but the strongest.

3. Wyrms are of European origin.

4. Found mainly in England and the Northern territories.

5. Have a layer of hard, protective scales.

7. The Lambton Worm was drawn out of a well, and was said to dwell in Lambton Hall after cursing the heir(s) to the Lambton castle.

8. Scatha the Worm, was a mighty long worm dragon of the Grey Mountains. Scatha is in the fiction of J. R. R. Tolkien.

9. Wyrms are associated with all round mean-ness.

10. “Worm” is often used as a derogatory term to dragons, so be selective with its usage.

12. Can rejoin themselves if cut into pieces.

Want to see and learn about more dragons? Cool! Check out the fun themes on our dragon ezine.