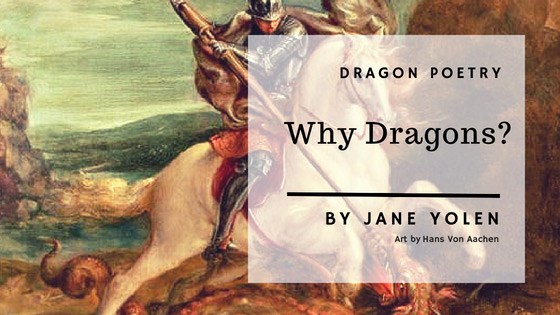 A dragon poem by the ever-captivating Jane Yolen.

This poem is printed here with the permission of the author and is not for reproduction elsewhere.

The smoke still hangs heavily over the meadow,
Circling down from the mouth of the cave,
While kneeling in prayer, full armored and haloed,
The lone knight is feeling uncertainly brave.

The promise of victory sung in the churches,
Is hardly a murmur out here in the air.
All that he hears is the thud of this faint heart
Echoing growls of the beast in its lair.

The steel of his armor would flash in the sunlight,
Except that the smoke has quite hidden the sky.
The red of the cross on his breast should sustain him,
Except – he suspects – it’s a perfect bull’s-eye.

The folk of the village who bet on the outcome
Have somehow all fled from the scene in dismay.
They’ll likely return in a fortnight or longer,
He doubts that they’ll be of much help on this day.

And then – with a scream – the fell beast of the cavern
Flings its foul body full out of the cave.
The knight forgets prayers and churches and haloes
And tries to remember just how to be brave.

The webs on the wings of the dragon are reddened,
With blood or with sunlight, the knight is not sure.
The head of the beast is a silver-toothed nightmare,
Its tongue drips a poison for which there’s no cure.

He thrusts his sword and he pokes with his gauntlets,
He knees with he poleyn, kicks out with his greave.
He’d happily give all the gold in his pocket
If only the dragon would quietly leave.

There’s smoke and there’s fire, there’s wind and there’s growling.
There’s screams from the knights, and his sobs and his cries.
And when the smoke clears, there’s the sound of dry heaving
As one of the two of them messily dies.

Of course it’s the knight who has won this hard battle,
Who wins in a poem beaten out on a forge
Of human devising and human invention.
BUT:
If there’s no dragon – then there’s no Saint George. 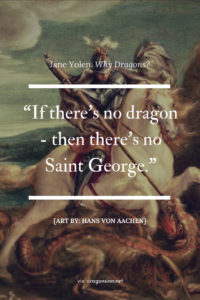 BIO: Jane Yolen is an author of fantasy and science fiction. She has written children’s books such as Owl Moon, How Do Dinosaurs Say Goodnight?, and The Devil’s Arithmetic.

She is a poet, an instructor of literature and writing, as well as a reviewer of kid’s literature. She is known as the Aesop of the 20th century and the Hans Christian Andersen of America.