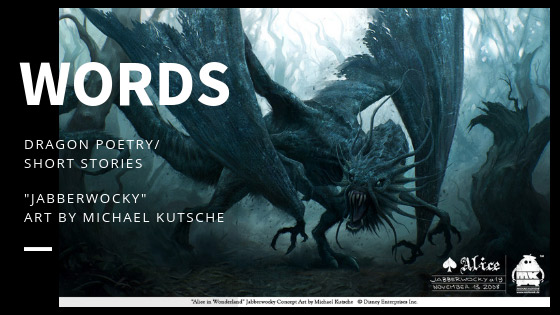 Part 8 of the collection of dragon poems from the old website.

In this post, we feature the poems of Lewis Carroll, Shadowscales Fierceflames, Anna Simmons, Kiryn Silverwing, and Bekka from Scotland.

Over 50% of the dragon poems have been transferred. After this, I’ll be transferring some Western dragon art and several articles. The updated site will be considerably smaller to begin with before starting afresh with new posts.

‘Twas brillig, and the slithy toves
Did gyre and gimble in the wabe;
All mimsy were the borogoves,
And the mome raths outgrabe.

“Beware the Jabberwock, my son!
The jaws that bite, the claws that catch!
Beware the Jubjub bird, and shun
The frumious Bandersnatch!”

He took his vorpal sword in hand:
Long time the manxome foe he sought–
So rested he by the Tumtum tree,
And stood awhile in thought.

And, as in uffish thought he stood,
The Jabberwock, with eyes of flame,
Came whiffling through the tulgey wood,
And burbled as it came!

One two! One two! And through and through
The vorpal blade went snicker-snack!
He left it dead, and with its head
He went galumphing back.

“And hast thou slain the Jabberwock?
Come to my arms, my beamish boy!
O frabjous day! Callooh! Callay!”
He chortled in his joy.

‘Twas brillig, and the slithy toves
Did gyre and gimble in the wabe;
All mimsy were the borogoves,
And the mome raths outgrabe.

many say that
‘dragons are evil’ or ‘they are not real
and get your head out of the sky, fool!’
but I know them wrong, and I feel

because i AM a dragon
it does prove them wrong! i’m alive
and i am not evil
i am a dragon-knight! i survive!

look at me! i fly the many worlds
to slay the wrongdoers and immorality
and battle for truth and virtue,honor
so others may be peaceful, pure, + free

do i look dead? do i seem like Satan?
no! open your eyes and look!
i am a dragon-knight!
not the savage beasts in books

i am a friend but not to evil
i am a dragon but not Satan’s brother
more like…a knight of righteousness
or Tiamat, the Dragon Mother

yes, I AM A DRAGON!
my kind could be good or evil, true
but I am a good friend!
do i seem wicked to you?

just realize this is not a false image
what you see is what i am, truly
so instead of insisting it is not
accept it and listen to me.

please listen–i am a knight
unless evil, immoral, cruel you be
i am a friend and you should
accept, respect but not fear or hate me

for the simple reason that i am dragon
i am NOT evil, beastly or dead
i am NOT kinfolk to Satan
but closer to Draco instead.

so i say ‘HA!’ to what some may think
for honor, justice, freedom + GOD, i fly
I AM A DRAGON-KNIGHT!!
and a righteous dragon am i!

Red, the Eastern fire
Of the mighty dragon —
The color in his eyes
Of hope and promise.

Red, the Western death’s
Bloodbath of sin —
In monster’s claws
A tale of greed and pain.

Red, the blooming flowers
Of love, and thorns of hate,
Ribbons hung from mystery,
Of life and death the same.

Author’s Note: This poem was inspired by a dream. I’m not sure when I had the dream, I wrote the poem in September, 2001. It was one of my most vivid dreams, in which a wolf that was about six feet tall at the shoulder told me that I was correct in thinking that I am a dragon, and caused my transformation back to true form. It made me aware of the fact that a wolf would mean a great deal to me later in life.

In the bleak darkness of night,
Beneath the moon’s unerring light,
A group of strangers runs in fear.
From what, I do not know.

I find myself among them,
Running fearful with the crowd.
I wonder where we’re going, for
That too, I do not know.

And then a flash of silver light
Streaks past without a sound.
And then, before I see it come,
It is already gone.

Again it comes, but slower now;
Fleet-footed shape is seen.
But only for a moment, now,
Again it disappears.

But wait, once more it comes,
Sees me, and stops midstride.
Stops, and stares, into my soul,
Surprised to see me here.

His eyes are deep and full of wisdom.
In I fall, and thus learn all.
What I have known thus far was false,
All of life, a lie.

The truth appears before my eyes,
A truth I’d never known.
I was more than I had seen,
Much more than I am now.

He blinks, and I awaken.
I softly spread my wings.
He looks on with approval
As I fly through midnight dreams.

He soared high from his mountain plateau; surveyed his kingdom,
He left shadows in his wake as dark as he,
And a dragons’ lands his own
None dared defy the terrifyingly beautiful master.

But what’s this?
Down below him, another danced,
Screaming out his challenge, he dove, talons ready,
And he stopped,
And he died.
For the other had looked at him with eyes that pierced his heart,
And for the first time in his life he knew he’d met his equal.

The green dragon observed him, mischievous eyes sparkling,
Languidly, she stretched and flexed her wings.
“you are mine, Shadowdancer,”
She said with knowing grace.
“I am Starsinger.”

The black dragon regarded her and tossed his head, regally, defiantly,
For while he knew she was his mistress,
Her heart was also his.