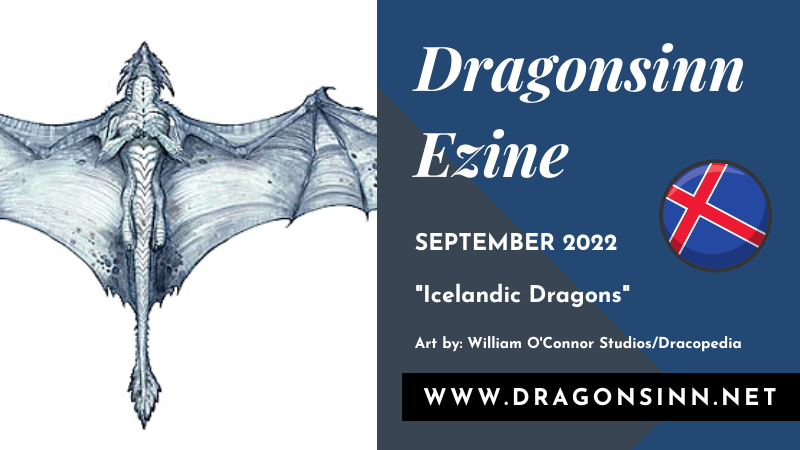 The theme of the last post was dragons in fashion design. The ezine themes post has been updated, too.

Dragon Quote of the Month:

I had an outpatient surgery done in August. Recovery has been mostly smooth. I get winded very easily from short walks and stuff, so I intend to slowly ease back into my usual yoga and light exercise routine.

Now that I feel less anxious about that whole experience, I’ve turned my attention to my three websites once again.

For those of you who are new here, my three sites are:

I have a photo book of Iceland at home!

The introduction of the book described Iceland as “The Land of Fire and Ice.” 🔥🧊

I’d love to travel there some day.

“Back in the days of the Vikings, there were many protective spirits running around Iceland.

[Poet] and historian Snorri Sturluson wrote about a giant dragon swooping down a valley near Vopnafjörður fjord. . .This dragon is actually one of four spirits that supposedly guarded Iceland. You’ll see a dragon, a bull, a vulture, and a giant as the shield bearers on the country’s official coat of arms.

This tradition in Icelandic mythology is still honored today.”

The Alþingi is the supreme national parliament of Iceland, and one of the oldest surviving parliaments in the world. Here’s a dragon sculpture that decorates one of the windows of Iceland’s parliament building.

Here are some other cool dragon finds in the majestic landscape of this country.

This “rocky dragon” can be found in Hvítserku, Northwestern Iceland. The 50 feet (15 meter) rock formation resembles a dragon. Look closely from this angle in the photo and you can see the dragon’s teeth, eye, legs, and tongue, making it look like it’s drinking from the North Atlantic Ocean.

This isn’t Photoshopped—it’s a photo that NASA posted showing a dragon-shaped aurora in Iceland’s winter sky on 18 February 2019.

Jingyi Zhang and Wang Zheng captured the image of this huge draconic aurora.

Excerpt: “It is possible that the rare encounter mentioned in the Mabinogion was the instance of a White Dragon migrating from its home in Iceland to the cliffs of Wales. Today there are very few specimens of White Dragons still alive.

Like all of the Great Dragons, they are an endangered and protected animal, with their native habitats on the shores of Iceland kept as preserves.

Visitors to Rekjavik Iceland often enjoy Dragon spotting cruises to try to catch a glimpse of this powerful and majestic animal in its natural environment.”

This post wouldn’t be complete without a piece of dragon art by an Icelandic artist.

This painting was created by Asgeir Jon Asgeirsson as metal album illustrations (for the Icelandic metal band, Skálmöld, which means Age of Swords and “lawlessness”).

Nordic mythology is epic and I love the battle and sea lava cliff details in this rendition.

Here’s a snapshot of a store in Iceland that sells “nearly all of the world’s greatest soft drinks.”

Thanks to Elina Hallgrimsdottir for sharing this pic.

The piece is based on an original oil painting inspired by Game of Thrones.

According to IAmReykjavik.com: “Anyone who is a Game of Thrones fan (or an Iceland fan) can tell you that many of the iconic show’s dramatic outdoor landscapes were filmed in this small Nordic country.

From areas north of the Wall to Wildling and White Walker territory, Iceland is home to a multitude of backdrops where battles, tragedies, and standoffs took place on the hit HBO series.”

See You Next Time

I’m probably doing a Halloween-themed post for the next dragon ezine.

September is also my birthday month. If you have documentaries to recommend, please let me know. I recently watched a Salem Witch Trial documentary and might blog just blogged about it on my personal site.

I’m planning on relaxing at home on my b’day with a good film + good meal. 👋