In this issue, we’ll take a look at some mesmerizing medieval dragon art.

This was an exciting post to put together, partly because I’ve always liked medieval history!

The Dragonsinn printables shop has been set up and it should be launched within the next few weeks.

As for future Dragonsinn Magazine issues, I’m aiming to eventually post them closer towards the middle instead of the end of the month. 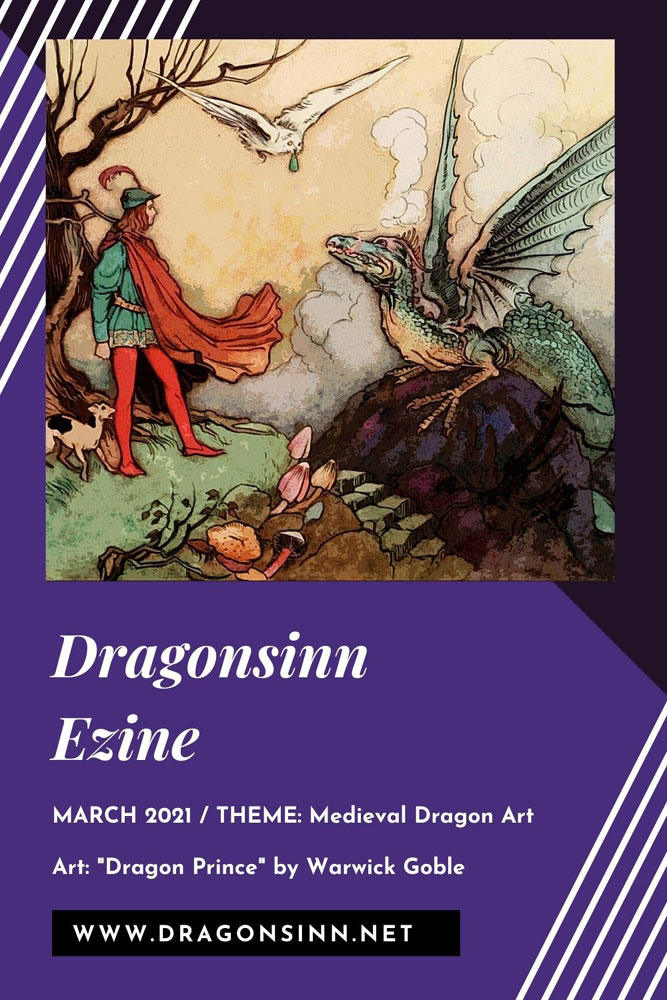 Before I continue with this month’s medieval dragon art issue, could you let me know if you come across any broken images or pages on this site?

I recently converted the website to https and am using DNS caching. I’ve noticed broken images in a couple of places and had to manually purge the cache in order to get it to load properly.

I’m also merging my professional and creative writing portfolio into one website so that I’ll be less burdened by web maintenance issues. I’ll be trying out WordPress.com instead of WordPress.org for that merged website to relieve the hypertension I experience from trying to get a self-hosted WordPress properly set up.

I’ll post a short update about that once I’m done with the move. It isn’t a huge site at the moment which makes it more manageable.

P.S. BlogAid.net has a new site set-up service and other related services if you’re interested. Because we’re not all developers, and sometimes it’s too much of a headache to troubleshoot everything by yourself.

It’s Time to Get Medieval!

With that intro out of the way, let’s transport ourselves back in time and let our eyes feast upon medieval dragon art pieces to ooh and aah over.

King Arthur and Robin Hood were two of my favourite stories as a child. I’m still captivated by those tales even those it’s been many years since I was first introduced to them.

There are many things to love about the medieval era: the romance, the food, the chivalry, the quests, the long journeys and never-ending adventures on the horizon…

My book cover is literally yellow with age, but I don’t care. It’s one of the many books my mum supplied to me when I was a kid with a voracious appetite for reading (thanks, mum!).

That’s a beautiful piece of dragon art from the Arthurian legends. It’s from the illustrated book, Stories of King Arthur, retold by Blanche Winder published by Ward, Lock & Co. in London and Melbourne in 1925.

For more pictures from the book, check out the original post at MU Library Treasures (the blog of Russell Library, St. Patrick’s College in Maynooth, Ireland).

As mentioned in my ancient post on Famous Western Dragons, Merlin in the Arthurian legends had a vision involving a red and a white dragon battling at the foot of a mountain. Geoffrey of Monmouth, the British cleric who brought European fame to the tales of King Arthur, described the white dragon as symbolizing the Saxons while the red dragon represented the people of Britain.

Wace was the translator who brought Geoffrey’s work to France 1155. Wace expanded Arthurian elements in his version, called Brut. It was Wace’s Brut that first introduced the famous Round Table. (Source: Owlcation)

I wasn’t hanging out much on ArtStation two years ago, otherwise I’d most likely have seen the Legend of King Arthur art contest.

The following artwork is by Jess Seto, depicting a “sigil / banner for Camelot that’s mostly focused on King Arthur,” whom the artist interpreted as being an entitled manipulative warlord.

I found the following three pieces on Pinterest. I tried to do a Google reverse image search on one of them but was unable to find the original source.

If you come across the source for the green dragon, please let me know so that I can update this post.

From the British Library blog on The Anatomy of a Dragon:

“Dragons are near-ubiquitous in medieval manuscripts. They take pride of place in bestiaries and herbals, books of history and legend, and Apocalypse texts, to name a few.”

In medieval texts, dragons are symbols and even serve as decoration on manuscripts. What they looked like physically could have a lot of variation.

Here are two paintings of the ancient Greek legendary ruler depicted with dragons.

This first painting portrays the birth of Alexander the Great. From the Getty blog on A Hero’s Journey and the Dance of Dragons:

“Olympias holds the newborn Alexander while a dragon descends upon her bed from the upper-left-hand corner. Quintus Curtius wrote that Philip of Macedon dreamed of a dragon sleeping next to his wife, which the Delphic Oracle interpreted as the god Zeus Amnon.”

This is a detail of a miniature painting featuring Alexander the Great battling against winged dragons.

If you look closely, you’ll see that the dragons have emeralds lodged in their foreheads.

In this amazing panoramic painting, there’s a green dragon on the left flying in the sky.

The painting shows a royal summit meeting at Balinghem. It was a lavish display of wealth from 7 to 24 June 1520, between King Henry VIII of England and King Francis I of France.

The painting “depicts a dragon flying overhead and this could be interpreted to mean that the Mass [during the ceremony] was interrupted by a mysterious event thought to be a dragon or salamander flying over the congregation.” (Wikipedia)

The following painting “shows Henry VIII, his three children, and Queen Mary’s husband, Philip of Spain, alongside figures from mythology. Painted in Elizabeth’s reign c. 1572, the picture stresses her legitimate descent from the Tudor dynasty and her role as a bringer of peace and prosperity to the realm.” (Wikipedia)

You can see a lion and a dragon on the crest in the background.

And since we’re on the topic of The Tudors, I simply have to recommend the show with Jonathan Rhys Meyers.

I watched all 4 seasons of The Tudors on Netflix during a warm summer when I was living in Maine. Great cast and I’d absolutely watch it again.

P.S. I just recognized this past week that the actress (Maria Doyle Kennedy) who played Mrs. Bates in Downton Abbey is the Spanish queen in The Tudors. I remembered her face and voice!

If you want to get fancy, here are some dragon tiles you can install in your home!

These dragon tiles are made to order and have been installed in Norway, Japan, the UK, Canada, and throughout the U.S.

I’ve added the following books to my Amazon wish list.

Can’t ever have enough books on my shelf. 📚

If you have some time, here’s a nice episode from The History Channel on Dragons: Myth vs. Legend (about 45 minutes).

See You Next Month

I hope you’ve enjoyed this short virtual trip on dragons in the middle ages.

I added a poetry table of contents page and might have a masterlist for all of the site’s pages in time.

I’ll be posting some of my professional illustrator sister’s dragon art work over the next few weeks, followed by an update about some of my old dragon poems that will be appearing in a UK book later in the year.