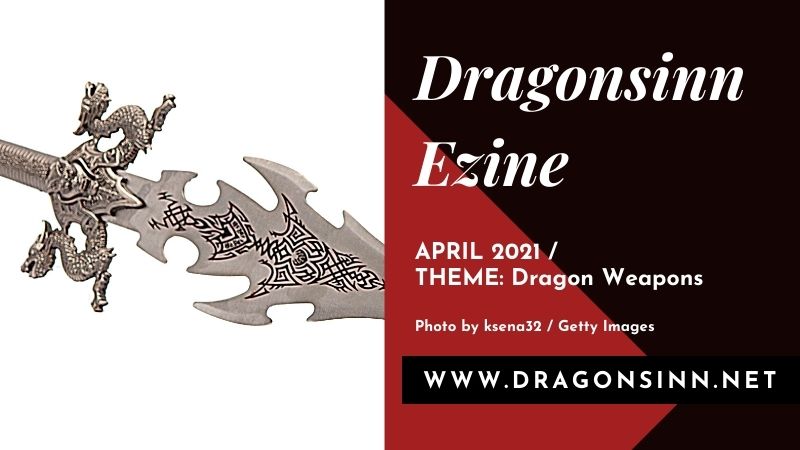 Last month’s theme was on dragon medieval art — this month follows up on the theme with dragon weapons and armor.

This post might be a bit shorter than some of the other ezines as I’ve been limiting my after work hours at the computer. I’ve had some shoulder soreness in the past week from a combination of seating positions at the PC and a habit of sleeping all night with my elbow under the pillow.

I hate sleeping on my back…but I suppose it’s something I have to train myself to do!

I’ve included a yoga shoulder exercise at the end of this post in case it’s something you struggle with also. 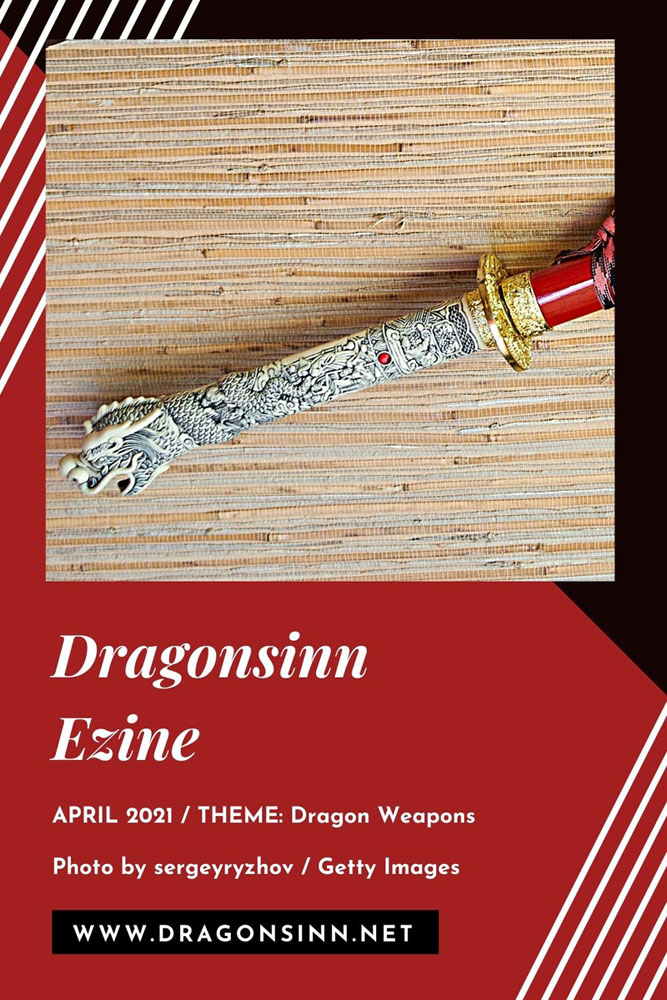 I’ve selected several quality images of dragon weapons, with a mixture of photos and original art.

I liked this close-up image of a dragon sword handle.

Swords and Armor stocks pieces from some of the world’s finest sword makers.

According to the site, “traditional swords were folded many times in the traditional way to obtain the best combination of strength and flexibility.” This gave a sword durability. The handle had to be flexible in contrast to be able to take the heavy blows of the blade striking an object.

Jonah Lobe is a game developer and artist, and creator of the dragon in Skyrim.

He was polishing up this Dragonbone Armor for his portfolio.

Jonah worked at Bethesda Softworks for seven years where he worked on many of the characters and weapons found in games like Fallout 3 and The Elder Scrolls V: Skyrim.

He lives with his family in Brooklyn, New York.

Jonah has a Myth Masters ecourse on drawing fantasy creatures. Check it out to improve your drawing skills!

He also live streams on Twitch.

Found this photo of a samurai sword posted by Dave, who runs the website.

Dave’s fascination with Japanese swords began in 2005. He had been running his first martial arts gear shop online and was asked if he sold any ‘real’ Japanese swords.

Ryujin was the deity of the sea in Japanese mythology. This dragon had human shape-shifting abilities. Many considered him as the bringer of thunder and rain, and saw him as a symbol of the ocean’s power. Ryujin is seen as a good god because of the Japanese living off the sea for centuries. It is said that his underwater palace was fashioned out of red and white coral, from where he “controlled the tides with magical tide jewels. Sea turtles, fish, jellyfish, snakes, other sea creatures are often seen as Ryujin’s servants.” (Wikipedia)

Check out our old post on Japanese dragons to learn more about dragons in the region.

These are some amazing dragon swords created by 3D artists.

Julie’s Comments: “Created from Grafit Studio’s Celestial Commander for Onneisha. I chose to [feature an] engraved floral pattern on the flat sides of the blade.” (ArtStation)

Is anyone reading this a fan of the Diablo video games?

I’ve played as a few characters in Diablo III so far. When I played as the Barbarian, I picked up several cool weapons. I liked using the ax a lot as the barbarian.

This is a dragon hand ax with the dragon’s wings forming the blade.

The rounded pommel at the bottom of the handle is the dragon’s egg wrapped in flames. Snazzy.

This is a 3D dragon helm made with Maya, Zbrush and Photoshop.

The helm is visored and embellished with gold, with the head of Glaurung the Dragon at the crest.

Glaurung is the first fire-breathing Dragon in Middle-Earth (by Tolkien). He was known as the Father of Dragons.

I loved bows and arrows as a child, and I still find them fascinating. This is a 2D artwork featuring a dragon bow and arrow.

I had a thought that there would surely be some dragon pistols or guns, and a bit of digging on Google did not disappoint.

Artist’s Comments: “This is a stylized Chinese flintlock pistol. I wanted it to look old but possibly still in use.” (ArtStation)

How amazing is that! It was created by Riyah Hasan for the Feudal Japan: Artstation Challenge. This artwork won an honorable mention for prop art in the challenge.

To view the other jaw-dropping submissions, visit Feudal Japan: The Shogunate Award Winners and Honourable Mentions.

9. Video on Blacksmiths and Weapon Making

When my boyfriend and I went to St. Augustine, we visited a blacksmith exhibit at The Fountain of Youth Park.

It was an educational and historical experience to see a weapon being forged…and the flames were super hot.

10. Video on Yoga for Neck and Shoulders

As mentioned at the start of this post, here’s a shoulder stretching video. I tried this out today and found it relaxing.

Thanks for coming by for these dragon weapons in another issue of Dragonsinn Magazine.

Next month’s theme could be on Jade Dragons.

I had some ideas for a couple of other website anniversary posts and will brainstorm over the next few weeks.