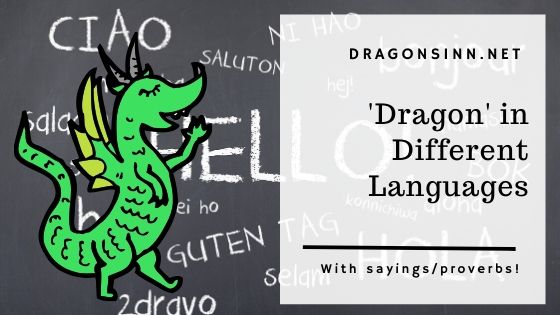 This page on how to say ‘dragon’ in different languages was published long ago in the early 2000s.

Do you hang out at Duolingo and other language apps?

Languages are a fantastic way to get to know other cultures better. And isn’t it interesting that there are so many cultures and languages that have the word ‘dragon’ as part of their vocabulary?

The following list was originally mostly compiled from Draconian.com — visit that page to view the full list of dragon words in other languages. You can also try the online dictionary at Omniglot.

Included below are some of the more well-known words!

What is the Chinese word for dragon?

The Chinese word for dragon is ‘lóng.’ 龙

What is the Norse word for dragon?

The Norse word for dragon is ‘Ormr.’ The name Lindwyrm comes from the old norse word Linnormr which means ‘ensnaring snake.’

What is the Celtic word for dragon?

The Celtic word for dragon is ‘Aerouant.’ The masculine Breton name Erwan and French equivalent Yves come from this Celtic word.

As a bonus, here are some famous cultural sayings about dragons.

人中之龙 (rén zhōng zhī lóng)
Means: “A dragon among men.”
This proverb or idiom is used when describing a superlative and exceptional talent.

龙飞凤舞 (lóng fēi fèn gwǔ)
Means: “Dragon flies and phoenix dances.”
Refers to a flamboyant calligraphy style where the writing is absent of real content. In other words, all fluff and no substance.

Japanese Quotes and Proverbs about Dragons

The head of a dragon, the tail of a snake.
ドラゴンの頭、ヘビの尾。
This refers to how the start is grand and majestic, similar to a dragon’s head. However the ending is small and pathetic, like a snake’s tail.

Icelandic Proverb: The proverb ‘dragons often rise up on their tails’ is recorded in Málsháttakvæði, a 12th century Icelandic poem. The dragon often encountered in the poetry of medieval Scandinavian poetry is a ship, referring to the dragon shape on the warships of the Viking era.